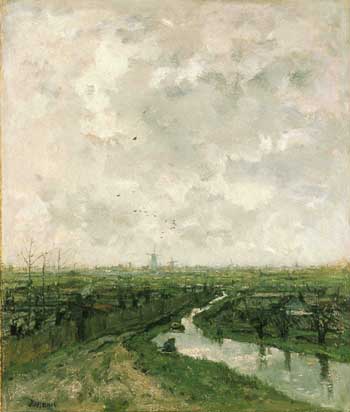 The masters of the School of The Hague, who for a long time were considered as the Dutch equivalent of the Impressionists, are represented here by 41 paintings and 16 drawings and water-colours, including 3 paintings and 10 drawings and water-colors of Vincent van Gogh. Here among his contemporaries, the Dutch origin of Vincent van Gogh is clearly visible while his freedom of brush announces Modernity.

With about sixty works the Gemeentemuseum Den Haag shows us the oeuvre of the most prominent painters from The Hague who gave the artistic tone in the Netherlands between the years 1870-1900. Their landscapes, domestic scenes and portraits lead us through the poetry of ennobled and serene everyday life. It is at the beginning of the eighties that Vincent van Gogh’s first drawings and paintings were made and where he gets to know some of the painters of The School of The Hague.

Recent research no longer labels the painters of The School of The Hague as the “Dutch impressionists” but considers them, precisely for their openness to the renewing pulse in landscape painting and their origin in the Dutch Romantic of Schelfhout and Koekoek, as the heirs of their colleagues from the Golden Century.

The exhibition in the prestigious rooms of the City Hall of Brussels not only continues to fortify the reassessment of these Masters, but also stresses the important role of the City of Brussels as a meeting-point of Dutch-French artistic connections.

One of the innovations that occurred in art during the 19th century was the idea of going out into the countryside to make oil paintings in the open air. Of course, artists of previous generations – Rembrandt, for example – had produced sketches out of doors, but for them the sketch was no more than an initial idea for a picture to be painted in the studio. The reason why we often find their sketches so attractive is their spontaneity – a quality sometimes lacking in the final work of art.

In the 19th century, there was a growing realization that artists could learn a great deal by working directly from nature. And landscape painting gradually came to be seen as important. Previously, only history painting had enjoyed high status: impressive tableaux based on stories from the Bible or from classical mythology, or glorifying the heroic deeds of historical figures. Gradually interest shifted towards nature and the representation of the everyday world. Realism emerged. In France, the foremost champions of the new ideas were the painters of the Barbizon School and Gustave Courbet.

In the Netherlands, the new ideas struck a sympathetic chord with the painters of the Hague School. While a leading Romantic artist like Andreas Schelfhout could still believe that working in the open air was just a waste of good paint, Weissenbruch declared “Nature, nature, that is my prescription!” Almost every day he was to be found in the dunes near The Hague or the polders towards Leidschendam, and later in the wetland area near Noorden. Whatever the weather, he felt compelled to be out and about studying nature in the open air. The same was true of Anton Mauve and Willem Roelofs. Mauve painted his famous Woman from Laren out of doors, model and all. After Mauve’s death, his studio was found to contain a large oil painting of a winter landscape with sheep that he had actually painted in the snow. Not all the Hague School painters were so radical, however. Jozef Israëls had a replica cottage interior built onto his Hague studio and summoned models from Scheveningen to come and pose in it. Willem Maris had a large duckpond in his own garden, so that he could find inspiration without leaving home. Mesdag viewed the sea out of season from a comfortable hotel room in Scheveningen and in summer from the beach. Even so, the reform-minded artists of the Hague School continued to proclaim the virtues of open-air painting from nature.

Leading artists of the school of the Hague

Bosboom was known mainly for his ecclesiastical interiors but also produced fine paintings of landscapes in Belgium and around Scheveningen. Jozef Israëls depicted the lives of country people and fishermen, sometimes against the background of a dune landscape. Weissenbruch was a virtuoso painter of skies and light effects, portraying the wide-open spaces of the Dutch landscape in all its grand simplicity. Mesdag concentrated on pictures of the sea in its various guises: in stormy weather and foul, but also during a flat calm or a summer sunset.

The three Maris brothers were also prominent members of the Hague School. Jacob (1837-1899), the eldest, excelled both in subdued pictures of the beach at Scheveningen with its round-bottomed fishing smacks and in traditional Dutch townscapes. Matthijs (1839-1917) was a dreamer who sought inspiration in his own imagination even in his landscape work. And Willem (1844-1910) was a landscape artist par excellence: few people in the Netherlands will be unfamiliar with his summer polder landscapes with their cows and ducks.
Finally, Willem Roelofs spent much of his life in Belgium but returned to Holland practically every summer to paint in the open air, preferably in his favorite wetland area near Noorden.
And although Gerard Bilders (1838-1865) died too young really to count as a member of the Hague School, his fondness for working from nature in the open air certainly marks him out as a forerunner of the group.

W.B. Tholen (1860-1931) and George Breitner (1857-1923) belong to the second generation of The Hague School painters. Tholen preferred to work on board his boat, the “Eudia”, in which he visited the harbor towns around the Zuyder Zee.

George Breitner helped to paint the Mesdag Panorama in his youth and during his time in The Hague frequently produced studies of military exercises on the beach at Scheveningen.

Vincent van Gogh and the school of the Hague

Van Gogh came from a family of clergymen and art dealers. His father was a clergyman, firstly in Zundert, later in Nuenen and his uncles did in art: paintings, drawings and reproductions – something very new at the time.

Vincent started at 16 as a learning boy at his uncle Vincent’s business (“uncle Cent (penny) in the family) in The Hague. He was even send out to the branches in Paris and London, but the young Vincent proved unfit for the art dealers’ trade. Then he decided to step in the footsteps of his father and to dedicate himself to evangelization. He got a job as an aid preacher in the Belgian Borinage, but this ended in utter disaster. Disillusioned Vincent returned to the Netherlands, determined to become an artist. From his time in The Hague he knew all kinds of painters whom we know now as the masters of The School of The Hague. He admired Weissenbruch and Mesdag for their cosy beach- and dunesscapes, Jozef Israëls for his portrayal of the hard existence of fishermen and peasants, and Jacob Maris for his beautiful townscapes; he was befriended with Breitner, Van der Weele and Blommers. He had best access to Anton Mauve, who was married to his cousin.

At the time Mauve was already a successful artist, with a good equipped workshop. Vincent could come and work there and practice figure drawing. Mauve frequently let little girls pose in the costume of Scheveningen and Vincent learned how to set up a water-color or an oil painting sketch. He eagerly collected English and French illustrated magazines and dreamed to foresee in his maintenance as an illustrator. He wanted to draw the heads of country folk. With Breitner he went to the station to sketch the people waiting. He also went to the asylum of Scheveningen to look for suitable models. He frequented young artists of his generation like Van der Weele and Theophile de Bock. In The Hague the panorama of Mesdag was painted and van Gogh assisted the festive opening and was wildly enthusiastic about all that beauty.

He wanted very much to becomes a member of the painters’ society ‘ Pulchri studio ‘ and of the water-color ring ‘ De Hollandsche Teeken Maatschappij ‘ and if destiny had had it differently Vincent van Gogh would have become a respectable member of the School of The Hague. Even uncle Cent made his contribution by commissioning a series of cityscapes of The Hague to be sold at f 2.50 a piece. Vincent however chose insoluble subjects, such as gasholders and shunting-yards and so the whole idea went wrong. Of a much more dramatic nature however was his friendship with Sien Hoornik, a pregnant prostitute. Vincent was concerned about her and provided her lodging in his house in the Schenkweg. When this was known, feelings over the incident ran high. Tersteeg, the acting manager of uncle Cent, warned the family and also Anton Mauve didn’t want to have anything to do with Vincent anymore. Vincent made a number of very fine and realistic drawings of Sien and of her mother from Scheveningen (with the typical local cap). The charity, of which his father preached on Sundays, was not meant for Sien however. The family forced him to break with her. Still greatly under the influence of the painters of The School of The Hague, Vincent left for Drente and Brabant, where he continued with his series of portrait studies, that he eventually used for De aardappeleters (the potato eaters). This topic came from Jozef Israëls, the model by excellence for the young van Gogh. After a training period at the academy of Antwerp – which also ended in failure-, van Gogh left for Paris. Inspired by the city and painters such as Signac, Toulouse-Lautrec and Gauguin, he worked himself lose from his Dutch origin and the dark colors of the School of The Hague. Among the vanguard of Montmartre, he became a painter of exceptional brio, but remained thankful to his Masters of The Hague for pointing out the importance of direct observation from nature.