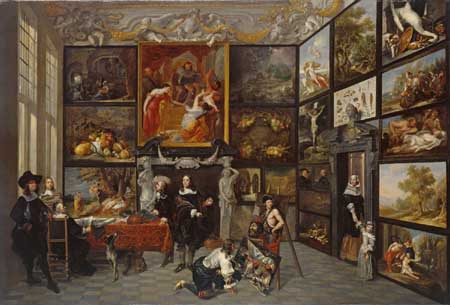 The Royal Museums of Fine Arts of Belgium will host some fifty paintings from the collection of Her Majesty Queen Elizabeth II. The exhibition will previously have been shown at The Queen’s Gallery at the Palace of Holyroodhouse and then subsequently at Buckingham Palace in London. The selection, centred on the paintings produced in our region comprises major works by Memling, Metsys, Gossaert, Bruegel the Elder, Paul Bril, Rubens and Van Dyck. These works will be displayed alongside relevant masterpieces from our own collections. The Massacre of the Innocents by Bruegel the Elder from the British Royal Collection will for the first time take its place beside The Census at Bethlehem from the Museum of Fine Arts collection, thus providing a opportunity to see the way in which Bruegel depicted biblical scenes in the snowy Brabant landscape in these two paintings.

The British royal collection is renowned for its great holding of works by Rubens and Van Dyck, both artists having spent time in England. The beautiful landscapes by Rubens will be a further attraction of the exhibition. One will also be able to admire some portraits of Rubens and one will also be able to see the sketch for The Assumption of the Virgin, – the monumental altarpiece from the Church of the Discalced Carmelites now housed in our museums. The religious compositions, the portraits by Van Dyck, scenes of peasant fairs by David Teniers, or the fascinating Young Man at the Window by an anonymous painter, all serve to provide a further rich insight into painting in the Southern Netherlands from the heritage of Charles V to the Peace Treaty of 1648.