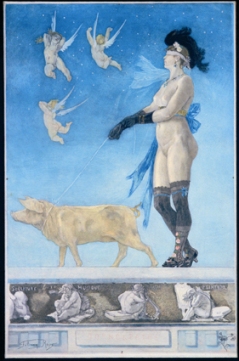 The Belgian artist Félicien Rops (1833-1898) was unrivalled in the nineteenth century in depicting the mystery of the female form. In an era in which eroticism and seduction were deeply mistrusted and invoked feelings of guilt, a time when syphilis and regular visits to the brothel posed a serious threat to married life, Rops succeeded in depicting the tense man-woman relationship in his pictures of voluptuous women and satanic satyrs. The Kunsthal will be exhibiting over 150 drawings, water colours and etchings from the Victor en Gretha Arwas collection. These works give a fascinating picture of eroticism during the Fin de Siècle. Rops was an intense artist with a passion for ‘woman’, which he translated into narrative depictions in his own, inimitable way.

His art was extremely popular among prominent citizens that included Victor Hugo and Gustave Flaubert, and the composers Franz Liszt and Gabriel Fauré. Artists like Edouard Manet, Edgar Degas and Auguste Rodin were admirers of Rops’s work. His popularity made him the best paid illustrator in Paris in around 1878.

The exhibition will be accompanied by the catalogue of the same name published by Terra, with contributions by Gerrit Komrij, Victor Arwas, Hanna Klarenbeek and Benno Tempel.