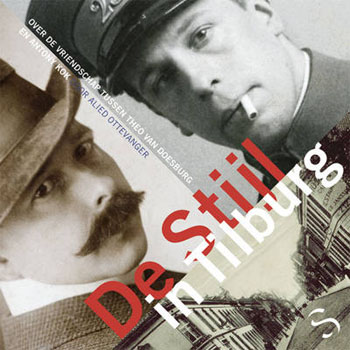 In the fifteen years of its existence, De Pont has produced many exhibitions on contemporary art. De Stijl in Tilburg happens to be an exception to this. Here the subject is the long friendship between Theo van Doesburg (1883-1931) – painter, architect and advocate of modern art – and Antony Kok (1882-1969), railway official in Tilburg. In this versatile exhibition, their friendship is documented in letters, cards, photographs and other material. On display are artworks that the two discussed. In addition to this, one can hear poems being read aloud and music being played. The exhibition has been compiled by Dr. Alied Ottevanger, who carried out research on the correspondence between the two men; financial support has been provided by the City of Tilburg.

“(…) My dear fellow, I’m very much looking forward to seeing you here again,�? Van Doesburg writes to Kok on September 9, 1917. “I have a great deal to discuss. The major point being: the 4th dimension. The article by Severini in de Mercure de France has raised this subject once again. Couldn’t you perhaps read something about this subject before we talk about it? There’s a good book by Prof. De Vries. I’ll be getting a copy for inspection one of these days. (…)�?

Despite differences between the extrovert Van Doesburg and the more reticent Kok, they shared a great interest in philosophical and spiritual matters. Van Doesburg was always ready to supply Kok with suggestions for private study, and Kok was never too troubled to assist Van Doesburg financially. In 1917, for instance, he helped him start the periodical De Stijl, and frequently he covered the cost of piano rental for performances by Van Doesburg’s third wife, Nelly. The basis for the friendship was Kok’s sincere interest in Van Doesburg. In him Van Doesburg found a sounding board, someone to whom he could not only tell his stories about lectures at the Bauhaus in Weimar, his Dada excursions through the Netherlands and Germany and his many encounters, but also someone with whom he could speak openly about his plans and motives. Kok was able to say, very directly and without hesitation, what he thought of the new ‘spiritual’ art; as a viewer, he had the gift of ‘re-creating’ art, as Van Doesburg put it. That became instantly evident from the start of their acquaintance in the autumn of 1914, when Van Doesburg was stationed near Tilburg while serving in the military. The story – probably romanticized – begins with Van Doesburg being drawn to the sound of piano music coming from Kok’s open window; apparently he was a rather accomplished player of the instrument. A year later Van Doesburg was relocated to Utrecht, but their friendship remained.

In the exhibition, light is shed on the course of this friendship, which is divided according to the various cities where Van Doesburg lived throughout his very active life: Leiden, Berlin, Weimar, Paris and Strasbourg.

Kok himself did not refrain entirely from artistic endeavors. Stimulated by Van Doesburg, he wrote several ‘nonsense rhymes’ in the spirit of Dada in 1915 and 1916. These were recited by Van Doesburg and later published in De Stijl. Kurt Schwitters, who made a Dada ‘tour’ of the Netherlands with Nelly van Doesburg in 1923, was so impressed by one of Kok’s poems that he published it in the inaugural issue of his magazine Merz. Kok’s contribution to the establishment of the magazine De Stijl is perhaps his most important achievement. Already during his military days in Tilburg, Van Doesburg had spoken to him about his plans. And that characterizes their friendship, which lasted until Van Doesburg’s death in 1931. This took shape not only in their correspondence but also in their many encounters with each other. Usually it was Kok who looked up Van Doesburg; as a railway official, after all, he could travel free of charge.