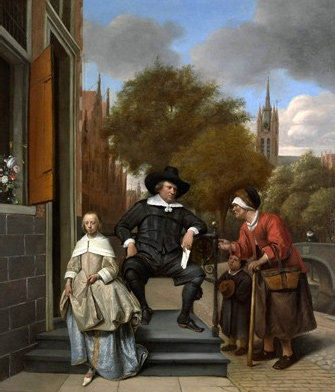 The true identity of figures in painting by Jan Steen unveiled, 21 December 2006

The figures in Jan Steen’s renowned portrait entitled A Burgomaster of Delft and His Daughter (1655), which the Rijksmuseum acquired in 2004, turn out not to be the burgomaster of Delft and his daughter. This was recently discovered by two researchers from the University of Amsterdam. Their investigation produced a number of surprising results, which enabled them to establish the true identities of the man and the girl in the picture. From 22 December to 6 March 2007, the Rijksmuseum will be putting on a modest exhibition in the Philips Wing of the museum to display the results of this research.

The painting entitled A Burgomaster of Delft and His Daughter has become one of the public’s favourites. Although the title suggests otherwise, there have been doubts as to the identification of the figures depicted in the painting for over a hundred years. This prompted art historian Frans Grijzenhout and historian Niek van Sas, both professors at the University of Amsterdam, to conduct their own research, the results of which have been published by the Rijksmuseum and publishing house Nieuw Amsterdam Uitgevers.

The research
Grijzenhout and Van Sas discovered that Jan Steen was inclined to use people from his own milieu as models for his paintings. Their research revealed that only one person could have been the model for this painting: corn merchant Adolf Croeser (ca 1612-1668). Adolf Croeser lived opposite Steen on the Oude Delft and had five children with his first wife, but only the girl called Catharina survived. She was christened on 13 July 1642 in the Old Church of Delft, the church portrayed in the background of the painting. In 1655, the year in which Jan Steen painted the picture, she celebrated her 13th birthday, which may well be consistent with the age of the girl in the painting.

Thanks to research conducted in the Delft Municipal Archives, Grijzenhout and Van Sas were able to form an accurate picture of the life of Adolf Croeser and his daughter. They also found the last will and testament of the twelve-year-old Catharina Croeser. This 350-year-old will, bearing the girl’s unsteady signature, will also be on show at the exhibition in the Rijksmuseum. The researchers ultimately came to the conclusion that it was quite likely that corn merchant Croeser supplied Steen’s brewery. He was, however, never burgomaster of Delft.

A burgher of Delft

Steen’s showpiece brings the history of Adolf Croeser and his daughter to life in an extraordinary way. The flower still life in the glass vase in the window sill on the left probably refers to the frailty of life in general and the death of Croeser’s first wife in particular. Whether Croeser was actually concerned about the less well-off in the city of Delft as the painting seems to suggest is not clear. It looks as though Steen wanted to portray Adolf Croeser as the centre of his world, between house, city and church, as a caring father, a good Christian and a respectable ‘burgher of Delft’.”

A burgher of Delft: a painting by Jan Steen