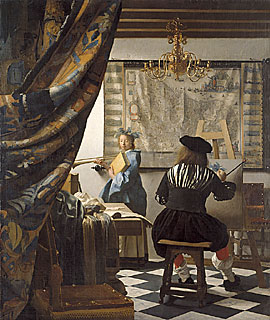 One of Vermeer’s great masterpieces, The art of painting (c. 1666-68) from the Kunsthistorisches Museum in Vienna, will be presented in the Mauritshuis from 25 March to 26 June 2005. Due to its fragile condition, The art of painting could not travel to the major Vermeer exhibition that was held in the Mauritshuis in 1996. Since then it has been subjected to intensive restoration, and may now be sent to other venues. Nine years after the survey exhibition, the Mauritshuis is delighted to present this work in the Netherlands. The Vermeer from Vienna will be displayed with three other splendid works by the artist from the collection of the Mauritshuis: View of Delft, Girl with a pearl earring and Diana and her nymphs.

Vermeer’s The art of painting is undoubtedly one of the most important paintings in his modest oeuvre. Made around 1666-1668, it hung in the artist’s own house until his death. This fact, as well as the painting’s large size and its subject matter suggest that it meant a great deal to him. Modern art literature has interpreted the scene as a personal statement by the painter regarding his profession. For Vermeer it functioned as a showpiece, both in terms of its superb execution and its theme.

The art of painting will be exhibited together with the View of Delft, Girl with a pearl earring and Diana and her nymphs from the Mauritshuis’ collection. Four important genres in which Vermeer specialized can thus be seen together: an interior scene, a cityscape, a portrait or tronie and a mythological scene.

To place Vermeer in a historical perspective, one of the galleries will feature paintings from the museum’s permanent collection by the master’s Delft contemporaries, including Pieter de Hooch, Gerard Houckgeest and Emanuel de Witte. The works of these artists – who were active in Delft in Vermeer’s time – are compared, and connections between them highlighted.

A painter is seen from behind, seated on a stool before an easel and portraying a woman. His costume, with puffed sleeves and a doublet, dates from the 16th century. His model, wearing a laurel wreath, and holding a long trumpet and a book, is identified as Clio, the muse of history.

This studio scene by Vermeer is not simply a depiction of everyday reality: various elements have a deeper meaning. For instance, the map of The Netherlands showing the 17 provinces refers to the fame Holland gained through the art of painting. The partially drawn curtain in the foreground represents the perfection that must be sought for in painting. And, the empty chair in the foreground awaits the art lover, who visits the painter in his studio in order to view his work. Vermeer invites us, as it were, to sit in the chair and study his representation in peace and quiet.

Vermeer executed the painting with utmost care. The texture of the map, with the vertical folds, is meticulously rendered. Together with the curtain and the chair in the foreground, the tile floor creates a sense of depth. The woman, Clio, is poses in the middle of the scene. In the right background is a second chair, half concealed behind the painter’s easel. The depiction of the interior is both clear and complex. Vermeer’s technical skill in evoking texture, and effects of light and shade, as well as the hidden symbolism, are nowhere so magnificently expressed as in this masterpiece.

The presentation of The Vienna Vermeer will be accompanied by a publication on the Vermeers in the collection of the Mauritshuis.

As was the case of the major Vermeer exhibition in 1996, the Rabobank is also the exclusive sponsor of this Vermeer presentation.