Albrecht Dürer (1471–1528), preeminent master of the German Renaissance, transformed drawing in northern Europe. Using his unrivaled talent as a draftsman and the force of his powerful artistic persona, Dürer tirelessly promoted drawing as a medium, creating works of exceptional beauty and remarkable technical skill. The exhibition includes eight extraordinary drawings by Dürer that demonstrate the variety and dynamism of his draftsmanship. Also included are prints and treatises by the artist.

Among the many highlights of the exhibition that illustrate Dürer’s preoccupation with beauty are his seminal engraving of 1504, Adam and Eve along with its most important extant related preparatory drawing. To create the work, Dürer joined several sheets of paper, and then unified the composition with brown wash to create a perfect balance between the two figures. Dürer’s efforts to resolve the composition are evident; both figures hold the apple that led to their expulsion from the Garden of Eden. Ever cognizant of his authorship, Dürer added his monogram and the date to the drawing. This iconic image, perhaps more than any other, documents how the artist strove to create both beauty and harmony in his depictions of the human form. 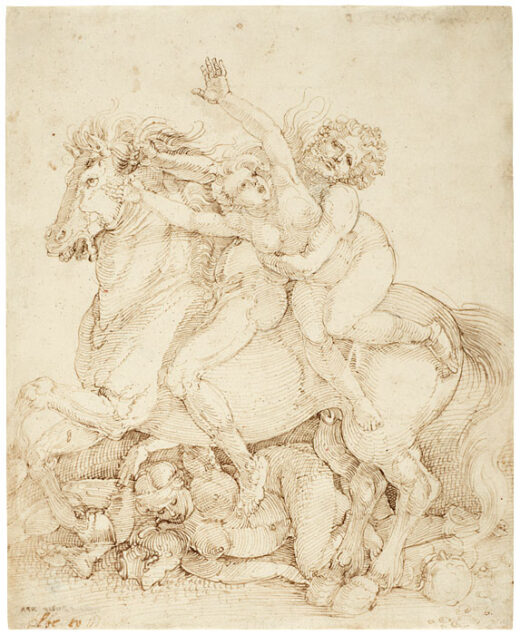 Demonstrating the persistence of Dürer’s fascination with perfect proportions is another work from about a decade later, Constructed Head of a Man in Profile. By overlaying a grid on a man’s head delineated in pen and brown and red ink, Dürer used geometry to construct a profile with mathematical precision. Also on view is a 1532–34 edition of his landmark treatise, Four Books on Human Proportion, a work in which he articulated his artistic philosophy and the centrality of proportion in his depictions of the human body.

Dürer, however, did not limit himself exclusively to a mathematical ideal. He also turned to the natural world as a source for his art. During Dürer’s lifetime, empirical observation became increasingly valued throughout northern Europe, as exemplified by the accurate topographical view of his hometown in the Nuremberg Chronicle of 1493. One of the most famous printed books of the fifteenth century, it was published by Dürer’s godfather, Anton Koberger. A similar commitment to observation is evident in the rugged features and fuzzy textures of Dürer’s unidealized charcoal portrait of his brother Endres. For Dürer perfection could exist in no single individual; he appreciated humanity’s variation and even its flaws.

Dürer saw beauty not only in the world around him but also in the spiritual realm. Kneeling Donor, a study for his altarpiece Feast of the Rose Garlands for the church of San Bartolomeo in Venice, reveals how deeply he was inspired by religious subjects. He adopted the technique of brush and black ink with gray wash and white heightening on blue paper during his 1505–7 stay in Venice. Also on view is one of his most famous engravings, Melencolia I. This enigmatic image of the allegorical figure of Melancholy, her head leaning upon her hand, has been seen alternatively as a statement on artistic creativity and as evidence of Dürer’s interest in ancient debates over the definition of beauty.

In other instances, Dürer turned to the aesthetic tradition of Germany, Nuremberg in particular, for inspiration. Dominating his drawing Abduction on Horseback is a hairy brute resembling the Wild Man, a folk figure with a long tradition in German art. The frenetic pen lines may be explained by the fact that the drawing was made in preparation for one of Dürer’s six known etchings—a new technique in northern Europe. He drew from the rich metalwork in Nuremberg as well; both his father and father-in-law were among the legion of renowned gold- and coppersmiths for which the city was famous. Dürer’s intricate design in pen and dark-brown ink for the decoration of a saddle shows the artist’s personal commitment to this decorative tradition. Further documenting his inventiveness is the bright, multicolored watercolor for a wall scheme in the Nuremberg town hall, a civic center and source of local pride whose decoration was extremely important to the city.

In his pursuit of beauty, Dürer devoted careful attention to every aspect of artistic production. On view in the exhibition are a woodcut, its associated woodblock, and a letter to the patron for whom it was made. In the letter, Dürer wrote, “Please let it be as it is. No one could improve it because it was done artistically and with care. Those who see it and who understand such matters will tell you so.”