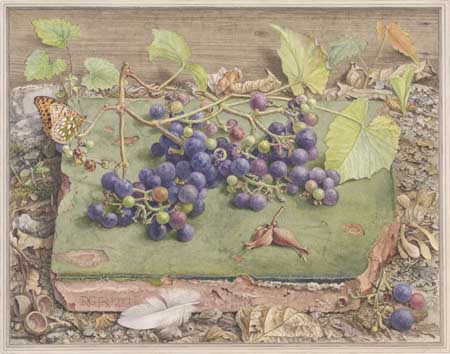 Dirk van Gelder (1907-1990) was one of the most important Dutch graphic artists of the twentieth century. His unprecedented technical virtuosity places him in the tradition of famous printmakers of the past like Hercules Seghers, Rembrandt and Rodolphe Bresdin (whom he particularly admired). His extraordinary works on paper show great technical expertise, a striking eye for detail and a love of nature. To mark the centenary of his birth, the Print Room of the Gemeentemuseum Den Haag is holding a special exhibition of Van Gelder’s prints and drawings.

Dirk van Gelder was raised in artistic circles. His father, Hendrik Enno van Gelder, was the director of the Haagse Gemeentemuseum (now the Gemeentemuseum Den Haag) from 1912 to 1941. Dirk was only eighteen when he made his first lithographs. Inspired by Theo van Hoytema and other exponents of Dutch art nouveau, he chose the plant and animal kingdom as his subject. During his first stay on Sicily in 1929, he was inspired by memories of Bresdin’s work to produce landscape drawings featuring rocky coasts, mountain ravines and almond and lemon groves. Back in the Netherlands, he used these as the basis for etchings.

Although working in the tradition of the French Romantics, Van Gelder developed a highly distinctive style using nature as his main source of inspiration. Still lifes of fruits, animal skulls or dead birds in a woodland or garden setting are particularly typical of his work, but he also produced views of the wooded countryside of his home province, vistas of rural Zeeland and countless studies of plants, wild flowers and insects. When he moved to the Zeeland village of Veere in 1938, he discovered new aquatic subjects in the form of shells, crabs and sea anemones. In de period that he and his family spent there, he made a number of aquarium drawings. The period was also marked by a permanent and almost complete switch from etching to wood engraving.

During this time, Van Gelder derived much of his income from the applied graphic arts, acquiring a reputation as a designer of stationery such as bookplates and letterheads, and as an illustrator of books such as Herman Gorter’s poem Mei. In 1952 he was appointed to teach etching at The Hague’s Royal Academy of Art, a post he was to hold for the next twenty years. In 1963, he returned to live in The Hague. Together with various colleagues and students, he later set up the Haagse Etsclub (Hague etching club), with the aim of producing and publishing portfolios of etchings of outstanding quality. He had time to contribute to the first couple of portfolios before dying at the age of 83.

There has always been a strong connection between Dirk van Gelder, The Hague and the Gemeentemuseum. His father’s job made him a frequent visitor to the museum and he lived for much of his life in the city. The museum has a sizeable collection of over 150 of his works on paper, including the Haagse Etsclub portfolios.

This exhibition is accompanied by a lavishly illustrated book likewise entitled Dirk van Gelder (1907-1990). Tekenaar en veelzijdig graficus. This provides a detailed introduction to the artist’s life and work plus a catalogue with illustrations and descriptions of van Gelder’s complete graphic oeuvre, comprising over 500 lithographs, etchings and wood engravings.