In the summer of 2017, The Frick Collection will present Rembrandt’s Abraham Entertaining the Angels of 1646. This captivating, small, and luminous oil painting on panel, generously lent from a private collection, has been exhibited only a handful of times in its history and was last on public view ten years ago. This exceptional loan has inspired a tightly focused exhibition in which the painting will appear alongside other depictions by Rembrandt of the Old Testament figure Abraham — a spectacular selection of prints and drawings from American and international collections. Divine Encounter: Rembrandt’s Abraham and the Angels will offer a rare opportunity to examine the artist’s continuing engagement with the Abraham narrative and thus with the central themes of his work as a history painter: divine intervention, revelation, and prophecy. The exhibition is organized by Joanna Sheers Seidenstein, Anne L. Poulet Curatorial Fellow, and will be accompanied by a scholarly publication and a variety of educational programs. 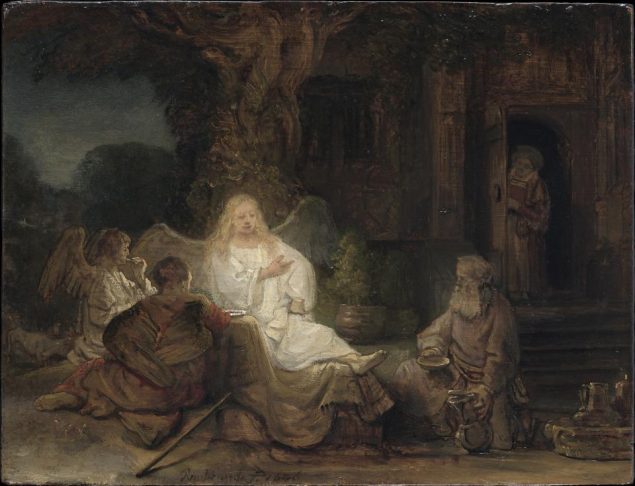 Spanning the late 1630s to the late 1650s, the works in the exhibition trace a shift in Rembrandt’s approach to biblical subject matter. In them, the artist took a progressively deeper interest in the psychological content of the Abraham story, specifically the emotional experience of a father confronting the most magnificent of blessings and the most heartbreaking of losses. At the same time, Rembrandt also began to move away from the physicality and instantaneity of his earlier narrative work in favor of imagery characterized instead by an overwhelming sense of stillness and calm. These are the defining qualities of his 1646 Abraham Entertaining the Angels, in which the momentous nature of the event depicted is conveyed solely through light and a single, gently raised hand.

This pivotal work in the artist’s career depicts an episode from chapter 18 of Genesis in which Abraham and his wife, Sarah, are visited by three travelers. These strangers reveal their divine status when one of them announces, to the aged woman’s disbelief, that she will give birth to a son in a year’s time. This is the third instance in the Bible in which God appears — the text is explicit — to Abraham. What the patriarch actually saw and how to represent it were, however, matters of interpretation. In the 1646 painting and in a later etching of 1656 depicting the same episode, Rembrandt directly addressed this question, exploring in two very different ways the nature of divine presence and human perception thereof.

Rembrandt continued to examine these themes in his other depictions of Abraham from the 1650s, as, for example, in his 1655 etching of the Sacrifice of Isaac — a deeply moving scene of physical encounter in which Abraham hears and feels but does not see the angel who has come to save his son. Other highlights of the show include two superb drawings from Dresden in which dazzlingly rapid strokes of the pen capture a sense of sudden manifestation and demonstrate the artist’s continued exploration of the experience of revelation. This exhibition is the first to bring all of this material together and will therefore provide a fresh examination of Rembrandt’s evolving approach to the representation of the divine across different media and of his engagement with artistic, theological, and philosophical questions about sight and perception.