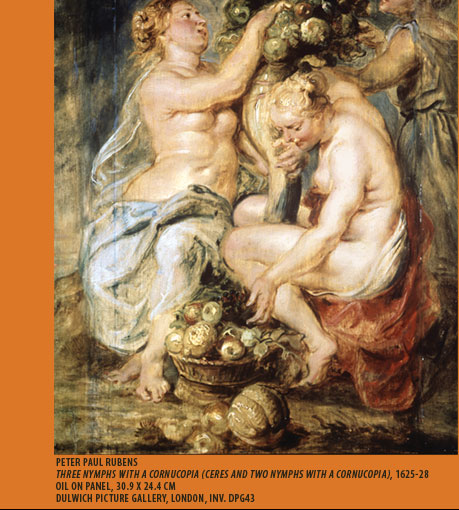 Drawn by the brush was co-organized by University of California, Berkeley Art Museum and Pacific Film Archive, the Bruce Museum of Arts and Sciences, Greenwich, Connecticut, and the Cincinnati Art Museum, Cincinnati, Ohio.

The University of California, Berkeley Art Museum and Pacific Film Archive (BAM/PFA) is pleased to announce the exhibition Drawn by the brush: oil sketches by Peter Paul Rubens, on view from March 2 through May 15, 2005. Rubens’s oil sketches are the most significant and direct record we have of the artist’s creative process, made entirely by the hand of the master.

Drawn by the brush is the first exhibition ever in the United States—and the first anywhere for more than fifty years—to present a comprehensive survey of Rubens’s oil sketches that includes works from collections abroad. The exhibition brings together approximately thirty-five oil sketches, some rarely on public view, carefully selected from public and private collections in the U.S. and abroad to present a wide range of the artist’s achievements.

“The oil sketches are an intimate glimpse of the artist’s original spark of inspiration,” says Lucinda Barnes, Associate Director for Art, Film, and Programs. “It is thrilling for us at BAM/PFA to see this long-dreamed-of project come to such exquisite fruition. This is an extraordinary and rare opportunity indeed for Bay Area audiences to experience firsthand the full scope of Rubens’s painterly, intellectual, and imaginative range. The oil sketches are the most direct record of Rubens’s talents. I think one of the great surprises to visitors will be how clear it is that Rubens was also an artist deeply engaged in the character, spirit, and social fabric of his time.”

Peter Paul Rubens (1577-1640) was one of the most gifted, versatile and influential painters in history. Eulogized at his death as the most learned artist who ever lived, he had a seemingly infinite capacity for inventive subjects and designs, a vast repertoire of figural poses and a sparkling palette. Rubens was also blessed with legendary personal charm, early revealing a gift for diplomacy and keen business acumen. He was the confidant of kings and princes who besieged him with commissions from across Europe, through which he earned honor and amassed a sizable personal fortune. At the pinnacle of success in his field, he was a man with exceptionally broad talents and interests; he served as diplomat, entrepreneur, and artist to European royalty. To an exceptional degree, Rubens’s life and work illustrate the ways in which the “art world” of seventeenth-century Europe intersected with the arenas of politics, theology, and commerce.

The exhibition surveys the development of Rubens’s use of the oil sketch and offers examples from most of the large decorative programs on which he worked. The sketches vary in their degree of finish, from a few fluid strokes on a small panel to larger, more carefully refined works used as presentation pieces for a potential patron. Yet all are united by their function as preparatory works for other, final works of art, not necessarily in the same medium. Some were to be translated into prints, sculpture or tapestry designs for weavers, while other sketches were executed from live models and kept on hand in the studio as a visual resource to be consulted in completing larger compositions.

Among the works in the exhibition, and a primary motivation for the project, are important paintings in the collections of two of the organizing museums, BAM/PFA and the Cincinnati Art Museum. “We are particularly excited to see BAM/PFA’s famous Rubens oil sketch, The road to Calvary, in the context of the artist’s extensive career,” says Barnes. “At the time the museum acquired this dramatic oil sketch, Svetlana Alpers, the renowned specialist in seventeenth-century art history and UC Berkeley professor emerita described the painting as ’one of the most beautiful as well as one of the most technically interesting of Rubens’s late oil sketches.’” Also featured in the exhibition are works borrowed from major museum collections that include the Metropolitan Museum of Art, New York; National Gallery in London; Museum of Fine Arts, Boston; J. Paul Getty Museum, Los Angeles; Philadelphia Museum of Art; Art Gallery of Ontario, Toronto; and other lenders.

Public programs at BAM/PFA will include a lecture by Svetlana Alpers, UC Berkeley Art History professor emerita and world-renowned authority on Rubens. Guided tours of the exhibition will be presented by UC Berkeley graduate students from the departments of History and History of Art.

A fully illustrated, 280-page catalogue, distributed by Yale University Press, discusses Rubens’s stylistic development, his major commissions and projects, his predecessors, techniques and materials, as well as the historical appreciation of the sketches. Authors are the Bruce Museum’s Executive Director Peter C. Sutton, Marjorie E. Wieseman, Curator of European Painting and Sculpture at the Cincinnati Art Museum, and Nico van Hout, Paintings Conservator at the Koninklijk Museum in Antwerp. Buy Drawn by the brush: oil sketches by Peter Paul Rubens from the museum’s online store.

Drawn by the brush: oil sketches by Peter Paul Rubens is supported in part by the National Endowment for the Arts and Samuel H. Kress Foundation.