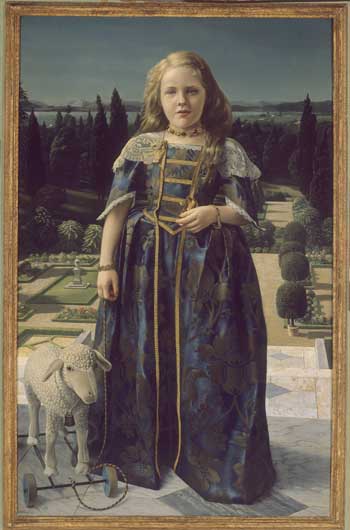 Masterpieces from the ING Collection at Rijksmuseum Amsterdam Schiphol

For the first time, a selection of masterpieces from the ING Collection can be seen together with works from the Rijksmuseum collection at Amsterdam Airport Schiphol. The exhibition, ‘Dutch Realism’, includes eight paintings from the ING Collection by magical realists Carel Willink, Dick Ket, Wim Schuhmacher, Raoul Hynckes and Edgar Fernhout, amongst others. Two of the Rijksmuseum’s recent acquistions will also be on display: a unique scenery design by Pyke Koch for the play ‘In Holland staat een huis’ (‘There is a house in Holland’), which was performed in observance of the marriage of Princess Juliana and Prince Bernhard, and Carel Willink’s ‘Johannes’, for which the artist himself served as a model.

The exhibition can be viewed from 7 June to 1 October 2007 in the Rijksmuseum Amsterdam Schiphol, in the area beyond the passport checkpoint between piers E and F.

The ING Collection is known for its masterpieces by Dutch magical realists. The artists of this movement, which began in the 1930s, often opted for an accurate rendering of the things they painted. In so doing, they sometimes revived old techniques or chose traditional subjects, such as those seen in the 17th century. Indeed, painting in the old style meant portraying the subject as realistically as possible. The magnificent ‘Girl in Renaissance-costume’, which was painted by Carel Willink in 1945, and ‘Still life with fruit and landscape’, which was painted by Raoul Hynckes in 1935, are two such examples. Whereas the symbolism in the 17th century paintings is common knowledge, works of magical realism seem to obscure an unknown personal world beyond the realistic surface. The interplay of the ING and Rijksmuseum collections, encompassing both 20th century works and their 17th century predecessors, is a splendid testament to realism – a predilection that can perhaps be called typically Dutch.