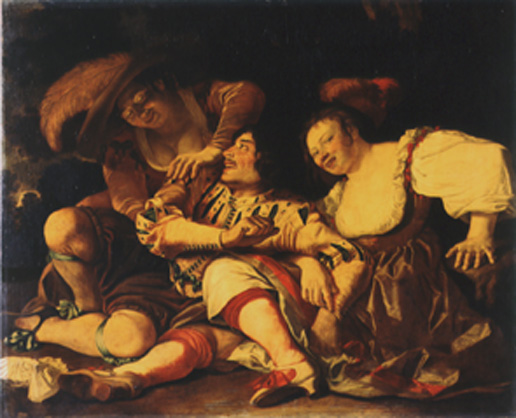 Bettina Baumgärtel, head of the painting collection, Kunstpalast Düsseldorf, with the aid of Kathrin Bürger

For the first time, the museum kunst palast is staging a major survey exhibition of pictures from its collection of 275 works by Dutch and Flemish painters. About 190 selected paintings dating from the 16th to the 18th century from this own collection, supplemented by 70 drawings and prints and also by approx. 37 outstanding loans from private and public collections will be on show.

Alongside large-format historical narrative paintings from Caesar Boetius van Everdingen to Jan Victoors, the sumptuous splendour of luxuriant still-lifes from Jan Pieter Brueghel to Frans Snyders, the virtuoso works of the Leiden precision-painters Frans and Willem van Mieris, and the highly allusive genre scenes of Cornelis Dusart and Adriaen van Ostade, this overview of the “Golden Age of Painting” is rounded off above all by the atmospheric landscapes of such leading artists as Jan van Goyen, Joos de Momper and Jacob Isaacksz. van Ruisdael.

The exhibition is supplemented by outstanding loans from public collections including those of the Rijksmuseum in Amsterdam, the Alte Pinakothek in Munich, the Gemäldegalerie Kassel, the Museum Boijmans van Beuningen in Rotterdam and the Dordrechts Museum, but also from private German collections. In this way, a number of works from the Electoral Collection, which by the vicissitudes of dynastic inheritance were moved from Düsseldorf to Munich in 1805, will be finding their way back home for a while.

The wealth of the collection of Elector Palatine Johann Wilhelm (reigned 1690–1716) and his second consort Anna Maria Luisa de Medici was legendary. That it was hung in a purpose-built gallery in the Düsseldorf City Palace was an innovation. But the electoral couple also hung numerous Dutch and Flemish paintings in their hunting lodge at Bensberg near Cologne. Their court painters included the renowned portraitist Jan Frans Douven, who also played a major part in the establishment of the picture gallery. The painter Adriaen van der Werff, who was much appreciated and highly paid by his princely employer, created a cycle of paintings especially for his patron.

The summoning of further artists to the electoral court, such as Godfried Schalcken and Eglon Hendrik van der Neer, or the still-life painter Rachel Ruysch, gave the picture collection a reputation which extended well beyond the elector’s own domains.

The heart and climax of the collection, however, were the works of Peter Paul Rubens, whose Assumption of the Virgin had, because of its monumental size (423 x 281 cm), to be brought from Brussels to Düsseldorf up the Rhine by barge. In the exhibition a smaller version (156 x 109 cm) will be presented of the same subject painted by Rubens, coming from Munich.

In the 20th century, bourgeois collectors such as Paul Girardet and Moritz J. Binder took up where their aristocratic predecessor left off. Thanks to their passion for 16th and 17th-century Dutch paintings, the museum’s collection was enriched by the works of such renowned artists as the landscape painter Jan Scorel, the Delft Caravaggio-follower Christiaen van Couwenbergh, and Rembrandt’s teacher Pieter Lastman.

This exhibition is also bringing to the public eye for the first time works which have long led a Sleeping-Beauty existence in the museum’s depot. Others in turn have undergone interesting re-attributions, and, thanks to restoration, can now be seen in a new light – like 80 of the presenting paintings. Using the example of a study by Adam Frans van der Meulen, long believed to be lost, showing King Louis XIV on horseback, a virtual picture-show tells the exciting story of the rediscovery and the removal of overlying layers of paint.

The exhibition is rounded off by drawings and prints from the museum’s own collection. These not only give an insight into the work of the masters in their studios, but also into the art market which disseminated the more prominent works in the form of printed reproductions.

To run currently with the exhibition A celebration of painting sponsored by the long-standing partner of the museum kunst palast, the E.ON AG, another, entitled Slow art, will present developments in contemporary art in these countries.