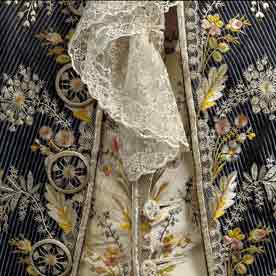 Vibrant silks, flowing satins, rich woollen damasks, baroque floral motifs, gold and silver brocade … 18th-century fashions are a feast for the eye. This exhibition gives a chance to admire a number of spectacular men’s and women’s costumes which were on show earlier this year at the Musée Galliera in Paris.

In the 18th century, France set the tone in matters of dress and Paris was the centre of fashion, though England also made its influence felt. It was a period with an international fashion scene and a European ‘look’. Marie-Antoinette and Princess Wilhelmina, wife of the Dutch Stadholder Willem V, were both regular clients of the renowned Parisian fashion retailer Rose Bertin, ‘Ministre de la Mode’ at the French court. The Netherlands followed international trends in fashion but also evolved its own forms of attire, partly because the Dutch East India Company was importing a multitude of splendid fabrics from around the world. A good example of these specifically Dutch fashions is the ‘Japonse rok’ (lit. Japanese gown), a loose gown made of beautifully painted cotton (chintz) or silk damask and worn by men in informal situations. The garment was derived from Japanese kimonos which reached the Netherlands as gifts from the Japanese Shogun, who controlled foreign trade with Japan (including that of the Netherlands). Both the Musée Galliera in Paris and the Gemeentemuseum in The Hague possess magnificent collections of 18th-century women’s gowns and men’s clothing. This exhibition will present these as mirror images of each other, so revealing the similarities and differences between ‘French’, ‘European’ and ‘Dutch’ fashions. It will bring together not only costumes, but also accessories, paintings and prints from Dutch, French and English museums and a number of major private collections. Through this wide range of objects, the exhibition will cast light on various aspects of 18th- century fashion, including a number of surprising Dutch features and the role of Paris in the development of these.

The event is the result of cooperation between the Gemeentemuseum Den Haag and the Musée Galliera in Paris and is being organised with the support of the Dutch government’s HGIS Culture Fund (which exists to promote international cooperation in the cultural field). It is accompanied by a Dutch- language catalogue published in cooperation with Waanders Publishers.