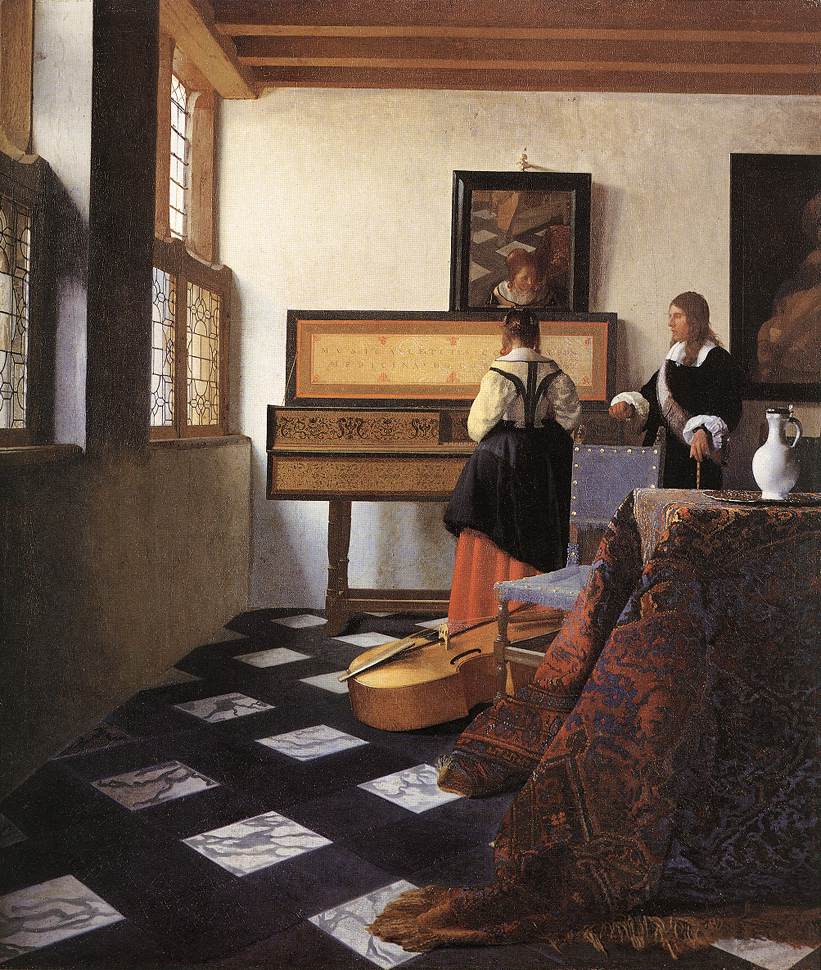 The Royal Collection contains one of the world’s finest groups of Dutch 17th-century paintings. Among the most enduringly popular images in Western Art, these pictures have for centuries been admired for their harmonious compositions, close observation of detail, subtle light effects and meticulous finish. The 51 outstanding examples selected for the exhibition embrace genre scenes, portraits, still-lifes, history paintings, landscapes and seascapes. They include works by the great masters of the period, among them Rembrandt’s jewel-like Christ and St.
Mary Magdalen at the tomb and his Self-portrait of 1642, luminous landscapes by Aelbert Cuyp, and Johannes Vermeer’s enigmatic A lady at the virginals.

Genre painting – the depiction of everyday life – flourished in the newly formed Dutch United Provinces, its popularity closely linked with the creation of a national identity. While artists such as Frans van Mieris the Elder, Gabriel Metsu and Gerard ter Borch show the preparation of food, eating and drinking, and the enjoyment of music inside the home, Isaac and Adriaen van Ostade choose the more rumbustious world of the tavern and peasant cottage as their subject-matter. A more intimate and poetic domesticity is encountered in the works of Pieter de Hooch and Vermeer. Here the viewer is encouraged to delight in the beauty of a simple interior or a sunlit courtyard – the reflections on glass and metal, and the textures of fabrics and fruit, brick and earth.

These carefully documented domestic details often allude to a painting’s deeper meaning, as if providing clues in a detective story. Works such as Nicholas Maes’s The listening housewife, Jan Steen’s A woman at her toilet and Gerrit Dou’s A girl chopping onions contain moral messages that would have been familiar to readers of contemporary Dutch proverbs or emblem books. The interpretation of the complex symbolism has been the subject of intense debate amongst scholars in recent years.

Paintings of the Golden Age reflected both the confidence and social tensions of the predominantly Protestant Dutch republic, one of the richest and most powerful nations in 17th-century Europe. This confidence is powerfully expressed in the portraits by Frans Hals, Jan Molenaer and Hendrick ter Bruggen, where the character of the sitter is momentarily frozen in a fleeting gesture and captured in virtuoso brushwork.

In landscape painting, whether views of the Dutch countryside by Meyndert Hobbema and Jan Wynants or the imaginary Italianate scenes of Nicolaes Berchem, man appears in complete harmony with nature. The importance of the sea as ‘the single most powerful motivating force in Dutch life’ is reflected in the number of marine artists active during the 17th century. The Royal Escape in a breeze and A calm: a States yacht under sail show how skilfully Willem van de Velde the Younger could depict the changing effects of light and air, and the directions of the sun and wind.

Still-life was a significant element in Dutch 17th-century art, whether as a subject in its own right (Willem Claesz. Heda’s Still-life on a
table) or as part of a larger composition (Willem van Mieris’s An old man and a girl at a vegetable and fish shop). Its purpose was not only to demonstrate the painter’s technical ability but also to advertise the abundant produce grown in Holland or imported from far-flung parts of the empire. The depiction of flowers, as in Maria van Oosterwyck’s Still-life with flowers and butterflies, mixed scientific curiosity and the appreciation of the natural world with lessons in human folly and vanity, reminding the onlooker of the transitory nature of life.

A number of paintings in the exhibition came to the Royal Collection as contemporary works; The artist’s mother by Rembrandt, presented to Charles I, was among the first examples by the painter to enter a British collection. The most passionate of all royal collectors, George IV acquired paintings by Steen, Hobbema, Metsu, Cuyp and the enchanting A boy and a girl with a guinea pig and a kitten by Adriaen van der Werff.

The exhibition mixes some of the most famous images associated with the Dutch school with works by less familiar artists. Among these are Barent Graat’s A family group, Godfried Schalcken’s The game of ‘Lady, Come into the Garden’, Hendrik Pot’s A startling introduction and Ludolf de Jongh’s perplexing composition A formal garden: three ladies surprised by a gentleman.

Edinburgh, The Queen’s Gallery at Holyroodhouse Palace, 14 May-7 November 2004