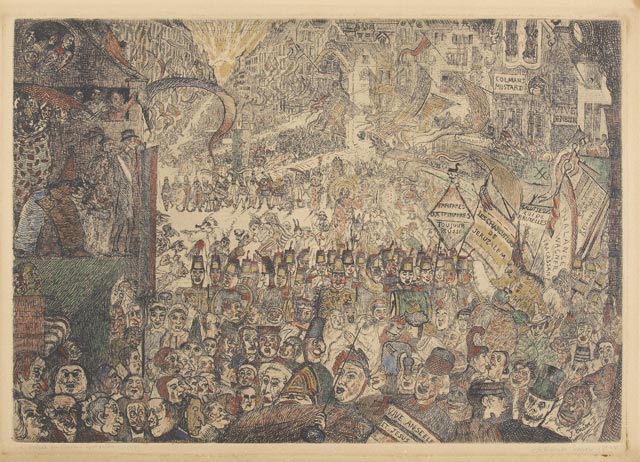 Belgian artist James Ensor (1860–1949) was one of history”s greatest printmakers. Unable to sell his paintings in the 1880s, he taught himself etching, a form of copperplate printmaking that has the expressive potential of drawing. This exhibition unites Ensor”s most important painting, Christ”s Entry into Brussels in 1889 from the Museum”s collection, with 33 of his prints made between 1886 and 1904 and drawn from the Getty Research Institute”s collection as well as two private collections. The prints and the painting share radical themes and images—grotesque masks, crushing crowds, strident political critiques, and haunting portrayals of Ensor and his alter ego, Jesus Christ. Together the painting and prints reveal Ensor”s creativity and technical virtuosity.

Ensor portrayed himself as a haloed Christ on the crowded streets of Brussels in his painting in the Getty Museum, a provocative reinterpretation of the story of Christ entering Jerusalem. Ensor used bold colors, aggressive brushstrokes, and distorted, mask-like faces to criticize the hypocrisy of capitalism, the Catholic Church, and the Belgian state. Eleven years later, Ensor transformed the enormous composition into a small print. It preserves many of the political slogans that Ensor apparently covered over in the painting when his politics grew more moderate later in life. The slogan at the bottom, Vive Anseele et Jesus (Long live Anseele and Jesus), brazenly associates Christ with Belgian socialist reformer Edouard Anseele.

A panicking crowd moves through a cramped city in Ensor”s Death Chasing a Flock of Mortals. Ensor saw the world as a crowd. In his etchings he combined chaotic, carnivalesque processions with images of the violent political protests he witnessed in Brussels in the mid-1880s. The Cathedral is a poetic vision of permanence and change in the modern world. Ensor used fine, wavering lines to create a colossal church, which appears to disintegrate in the late afternoon sun. Below, a dense crowd pushes inexorably toward an unknown destination.

Ensor”s self-portraits range from the satirical to the macabre. In My Portrait in 1960, Ensor imagined himself at age one hundred. With slippers on his feet and hair protruding from his skull, the reclining skeleton is accompanied by a fat, hairy spider—Ensor”s symbol of anxiety.

Ensor grew up around masks: his family owned a curiosity shop that supplied masks for the annual carnival celebrations in his hometown of Ostend, Belgium. Ensor later used masks in his art to symbolize the grotesque psychological and moral qualities of the figures wearing them. In Ghost, a demon with an oversized head looms above contorted figures who happily present their bottoms to each other and to us, oblivious to the threat.

A winged skull representing death hovers over figures of the seven deadly sins: pride, avarice, anger, lust, gluttony, envy, and sloth. That image is the frontispiece to The Seven Deadly Sins, an album of etchings that Ensor published in 1904. Several of the etchings in the album take place in domestic environments, reminding us that depravity and corruption are part of the everyday world.