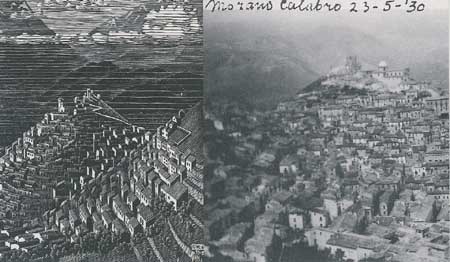 Maurits Cornelis Escher and his family lived in Rome from 1925 to 1935. Nearly every year he took long trips throughout Italy. During his trips he made drawings but also photographs. In the family albums, we have found photographs of places that he also drew. Although Escher did not work from the photos, they nonetheless give us, in juxtaposition with reduced reproductions of the art, surprising insights into his vision of reality. Mark Veldhuysen, director of the M.C. Escher Company, followed in Escher’s footsteps in Italy. Some recent photos by him are shown in combination with work and photos by Escher.