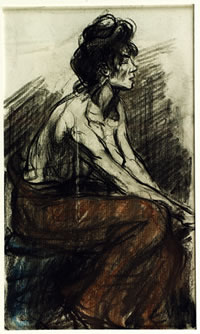 This exhibition of about fifty works, mostly drawings, is devoted to the role of women in the work of Eugeen van Mieghem (1875-1930), who is mostly known for his depictions of the working class in the port of Antwerp at the beginning of the 20th Century. Women played a decisive role in the life of Van Mieghem: first his mother, who gave her son financial and moral support, then his wife, who was both mother and artist’s muse and finally the women of the port of Antwerp whom the artist portrayed with respect and dignity.

In collaboration with the Eugeen van Mieghem Foundation.