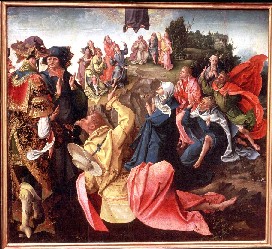 Master of Amiens, The ascension of Christ
Gemäldegalerie, Berlin

When writing his voluminous account of Flemish painting in the fifteenth and sixteenth centuries, the German art historian Max Friedländer (1867–1958) was confronted by a large number of paintings and drawings by unknown Antwerp masters from the period 1500-1530. Friedländer referred to these masters as the “Antwerp mannerists of around 1520” – a rather unfortunate turn of phrase because it can give rise to confusion with artists who are traditionally labelled as mannerists, such as Parmigianino, Pontormo, Bronzino and Spranger. Unlike the latter masters, the Antwerp artists of around 1520 were still working in a late-Gothic tradition.

The reason the group of artists has never been well-known or popular, is because we often do not know their names. The paintings are not signed and in most cases it is impossible to link the works with the names of painters found in the registers. Only a small number of these works have been classified. The makers of the altarpieces were given a nickname derived from either a wrong inscription, an owner, the place where a certain painting was kept or a date found on the work. As a result people talk of Pseudo-Bles, the Master of the Von Groote Adoration, the Master of Amiens, the Antwerp Master of the Adoration and the Master of 1518. The name of a number of masters has since been discovered, such as Jan de Beer and Adriaen van Overbeke and some claim that the Master of 1518 was Jan Mertens or Jan van Dornicke, the father-in-law of Pieter Coecke van Aelst.

The ‘Antwerp mannerists’ were a real phenomenon in their day. Their success was closely tied up with Antwerp’s development as a trade metropolis. At that time the city on the Scheldt was a magnet for foreign investment and, hardly surprisingly, an art market of international significance soon began to thrive in that healthy financial climate. Most of the altarpieces were destined for export. They were commissioned by merchants and sold on to other merchants. Original compositions were copied in any number of variations and themes were recycled. Subject and style were chosen on the basis of saleability. These masters often chose the ‘Adoration of the kings’ as a theme, because that subject was familiar all over Europe and much in demand. The three kings from the East and their retinue who come to greet the new-born Christ were a favourite subject of the artists, because they were a good pretext for painting partly imaginary and partly exotic clothes, bizarre footwear and striking headwear. The style of these paintings is extravagant. ‘Antwerp mannerism’ is a fashion statement. The fall of the folds of the flamboyant costumes worn by the characters in the paintings, eludes Newton’s laws of gravitation. The figures are depicted in rather unnatural poses. The background is dominated by a fantastic hybrid architecture covered with late-Gothic ornamentation and renaissance motifs. The ‘Antwerp mannerists’ were more concerned with technical virtuosity than with monumentality: no distinction was made between essentials and minor details.

The combination of extravagance and typically Flemish minute attention to detail proved a winning combination: large numbers of devotional pieces were shipped as far afield as Sweden and Madeira. It is not known just how the fashion began. What is certain is that in their earliest works talented masters like Jan Gossaert, Quinten Massijs, Joos van Cleve, Dirck Vellert and Pieter Coecke van Aelst were not insensitive to mannered extravagance. The same applies to Lanceloot Blondeel from Bruges, the painter Cornelis Engebrechtsz. from Leiden and the Master of Amiens.

ExtravagAnt! can be seen at the Koninklijk Museum voor Schone Kunsten Antwerp from October 15th to December 31st 2005 and at the Bonnefanten Museum in Maastricht from January 12th to April 9th 2006. It is the first retrospective to be devoted to the phenomenon of the ‘Antwerp mannerists’. Peter van den Brink (Aachen, Suermond-Ludwig Museum) was charged with selecting forty paintings and the same number of drawings from European collections. Most of the highly accomplished drawings are leaving the drawers of print galleries in Vienna, Berlin, London and Paris for the first time, while in Antwerp several important paintings are being restored in time for the exhibition: The festival of the archers by the Master of Frankfurt, Metsijs’ Magdalene and the triptych by the Antwerp Master of Adoration.

Among the masterpieces on show in ExtravagAnt! are the delicately painted Triptych depicting the Holy Family with music-making Angels by the Pseudo-Gossaert (Lisbon, museu de Arte Antiga), the newly restored triptych by the Antwerp Master of the Adoration (Antwerp, KMSKA), the work named after the Master of the Von Groote Aanbidding (Kitzburg), the Adoration of the kings triptych by Jan de Beer (Milan, Brera) and an extremely rare design for a stained-glass window several metres high depicting the Tree of Jesse by the same master (Vienna, Albertina).

The star attraction of the exhibition, however, is a large altarpiece by the Master of Amiens dating from 1518, Au juste pois véritable balance, painted for the city’s famous cathedral (now Amiens, Musée de Picardie). The painting is enclosed in a richly sculptured frame. The elegant figure on the poster of ExtravagAnt! derives from this work. The panel was painted for the brotherhood of the Puy-Notre-Dame, founded in 1389. That fraternity held a literary competition each year for the best allegorical maxim about Mary. The process of choosing the best line of poetry went hand in hand with the election of a prince who would lead the brotherhood for two years. That line of verse was also incorporated into ‘chants royaux’, songs which would be sung that year. Moreover, from 1451 onwards the chosen maxim was also depicted on a painting. However, most of these panels were destroyed in the early eighteenth century, so for this reason alone, the work shown here is exceptional. The ‘Puy’ was donated by a certain Antoine Picquet in 1518. The verse means something like this: Mary is the scales providing the ‘right balanc’, namely Christ. The gold coins, candlesticks and the gold cross are given for the Redemption. Among the worshipers at the bottom of the panel we recognize the donor and his family, the members of the brotherhood, King François I, Pope Leo X, several bishops and the newly elected Emperor Charles V.