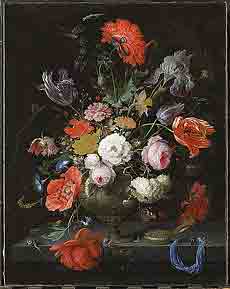 Tulips, roses and hyacinths at the Rijksmuseum Schiphol Amsterdam

After the successful Dutch windmill exhibition at Amsterdam Airport Schiphol, the Rijksmuseum Amsterdam presents another typically Dutch phenomenon: flowers. From 8 December until 27 February 2006, the exhibition Flowers will be on display at the Rijksmuseum Amsterdam Schiphol. Twenty works from the Rijksmuseum’s collection, including luxuriant flower still lifes, porcelain tulip vases, dazzling glass work and exquisite textiles, show that flowers were not only important for the economy in the Dutch Golden Age, but that they also became a key component in all sorts of artistic expressions.

Around 1600, a myriad of flowers from Asia – such as the tulip, the crocus and the hyacinth – found their way to Europe. The flowers were closely studied and recorded in botanical albums and drawings. In the exhibition, the drawings of Jacob Marrel and Maria Sibylla Merian provide beautiful examples of this.

Cut flowers, to us an everyday commodity, were luxury items up until the end of the 17th century. As prosperity increased among the rich, the popularity of flower gardens also grew. The ordinary citizen, however prosperous, did not have any flower bouquets at home. Nevertheless, there was a great deal of interest in this fashionable commodity. In order to satisfy the demand for flowers, flower still lifes became extremely popular in the 1630s and 1640s. Such paintings were cheaper than real bouquets – and kept longer! In the exhibition, a number of these magnificent 17th century flower still lifes can be seen, including Still life with flowers and watch by Abraham Mignon.

The lucrative trade in tulip bulbs that arose in the 1630s (‘Tulip Mania’) became a favourite subject of art after the stock market crash of 1637. What better referred to transience than the tulip? Later in the 17th century, starting in the 1660s, flowers became more popular. Textiles, silver work, weapons and paintings were adorned with flowers. There was a genuine ‘flower style’. In the exhibition at the Rijksmuseum Amsterdam Schiphol, extensive attention is paid to this style, with exquisite cushions, ceramics, silver rippled dishes and a chair with an embroidered seat.

The flower vase also came into being in these years. Flower holders were created in which each flower had its own spout. The large flower pyramids in particular were a display of great wealth. The exhibition features one of the impressive 17th century flower pyramids from the Rijksmuseum’s collection.

At the end of the 17th century, the rage of portraying flowers passed, but thanks to the rise of large-scale bulb cultivation, the Netherlands remained a flower country. Up to this day, flowers and especially the tulip – despite its Turkish origins – are seen as typically Dutch.