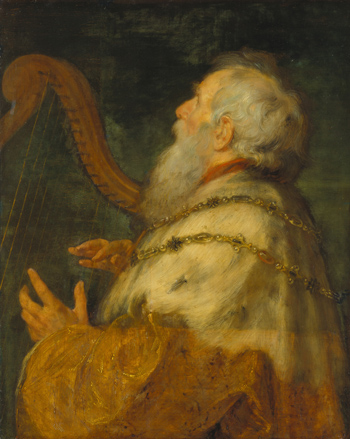 The painting King David Playing the Harp by Peter Paul Rubens (Siegen 1577 – 1640 Antwerp) and Jan
Boeckhorst (Münster or Rees ca. 1604 – 1668 Antwerp) has numbered among the outstanding examples
of Flemish Baroque painting in the Städel Museum collection since 1867. On account of the complex
history of its execution – evident already in the two artist names cited – this work is now being placed in
the limelight for the first time within the framework of our exhibition series “Focus on”. The painting
provides insight into the workshop practises in use in seventeenth-century Flanders, for it was only partially
carried out by Rubens himself: the head was executed by the master in around 1616 as a study on a
small panel. It was not until after Rubens’ death that his former employee Boeckhorst enlarged the character
head, a so-called “tronie”, by adding two further panels, thus turning it into the full-fledged painting of
King David. The exhibition shows how Rubens employed the “tronie” and sheds light on how Boeckhorst
expanded on it, leaving the head not only uncrowned – in a manner surprising for a depiction of King
David – but untouched in every way. Attention is also directed towards the contemporary reception of
Boeckhorst’s David. Thanks to an important loan from a private collection, the David is juxtaposed with a
further example of a Rubens head study likewise offered for sale on the Antwerp art market following a
similar enlargement.

Two artists were thus involved in the execution of King David Playing the Harp at two different times,
even if Rubens’ share of the work encompassed neither a figure of David playing a harp nor a “finished”
painting. On the contrary, in around 1616 he painted a study of a male head with the upper section of the
shoulders – a so-called “tronie”. The term tronie, plural tronies or tronien, was in use in the Netherlands
from the sixteenth century onward in the sense of “head”, “face” or “facial expression”, and can be translated
even today as “face” (in the sense of grimace) or “mug”. In art, it stands for isolated figures in bust
format without the kind of individualization carried out in portraiture. Such studies were the products of a
workshop practise presumably originating in Italy and adopted in Antwerp in the sixteenth century by
such artists as Franz Floris for history paintings whose compositions had already been developed. Panels
with studies of various facial expressions or perspectives likewise served the “painter prince” Rubens as
working material.

In 1609, having sojourned in Italy for several years, Rubens had just resettled in Antwerp when the twelve-year
armistice between Spain and the Northern Netherlands went into effect. The new state of peace
boosted the economy and, with it, art production. The demand for works to replace the altarpieces destroyed
during the iconoclastic controversy was another factor which benefited Rubens’ entrepreneurial
endeavours. As a painter in the employ of archducal couple Albrecht and Isabella without obligation to
reside at court, he was soon running a rigorously organized, flourishing workshop in Antwerp. A large
number of the extant head studies by Rubens known to us today are thought to have been executed in the
1610s, though Rubens employed “tronies” repeatedly, in his later years as well. A letter of August 17,
1638, for example, documents Rubens asking his pupil Lucas Fayd’herbe to bring three of his life-size
head studies from the Antwerp studio to his country estate “Het Steen” near Mechelen, because he needed
them for the execution of a painting – requesting that they be covered in such a way that no-one could
look at them during the journey. The “tronies” were not intended for sale, and therefore remained in
Rubens’ studio as workshop material until his death in 1640.
Later the head studies found their way onto the art market, but not without first being changed in many
cases: panels showing two heads grouped together were sawed apart in order to make two independent
paintings, and new boards were attached to those showing single heads in order to enlarge the shoulder
section or add arms. The addition of a hand holding an attribute or a special vestment, for instance,
endowed what had previously been a “neutral” and flexibly utilizable study with a specific narrative context.
After all, portraits and history paintings usually fetched higher prices on the art market than “tronies”.

It was not until the end of the 1640s that the head study by Rubens contained in the Städel painting
was enlarged at the left and bottom by two L-shaped boards. The upward-turned head in profil perdu had
apparently sparked associations with David, the royal psalm writer. Now hands, a harp, fur, a chain, a
cloak and the dark greenish blue background were rendered on the original panel and the two new ones.
In the process, the shoulder section on the core panel was reworked, but the head with the red kerchief
around its neck was left untouched, as is evidenced by patches of the original grey background behind the
projecting tufts of hair.

In the exhibition, the execution of the core panel and the later additions are elucidated with the aid of
technical investigations (dendrochronological findings, an x-ray, an infrared reflectogram and microscopic
photographs), and the attribution of the work’s expansion to Jan Boeckhorst – also known as “Lange Jan”
(“Long Jan”) – is also examined. The latter was admitted to the Antwerp painters’ guild as a master in
1633/34, and was involved in the execution of major Rubens commissions during the 1630s. His identification
as an artist as well as the extent of his interventions – in connection with head studies as well as
other works by Rubens – are topics often fraught with problems from the art-historical point of view.
Boeckhorst’s paintings of the 1630s still exhibit Rubens’ influence; the impact of his interest in Anton van
Dyck (Antwerpen 1599 – 1641 Blackfriars, London) begins to be apparent shortly before 1650. His
brushwork becomes increasingly looser, his palette broader and lighter. Boeckhorst’s figures are distinguished
by their long, slender hands in the manner of van Dyck, to whom the pastose, sketchy style can
also be traced – seen, for example, in the nervous, plastic ornamentation and the angular folds of King
David’s brocade mantle.

The Head of a Bearded Man in Profile Facing Left, a privately owned work being presented here as a loan
for the first time to enable comparison with the Städel Museum’s David, was once in the same collection
as the latter – the famous Schönborn holdings in Pommersfelden – and represents a comparable case of a
Rubens head study later enlarged. Used in 1616/17 for one of the three kings in the Adoration of the Magi
in the Church of St. Jan in Mechelen, the addition of the hand places the bowed head in profile in a
distinctly non-religious context: that of a bronze statuette only very recently identified as Youth with Raised
Arms (Narcissus) by Barthélemy Prieur (Berzieux 1536 – Paris 1611). In the eighteenth and nineteenth
centuries, the Pommersfelden catalogues refer to the figure as an “old philosopher” or as a presumed
portrait of a sculptor or collector.
The thematic transformability, however, is also clearly evident in the Städel Museum’s head study, which
Rubens also employed both for the figure of an apostle as well as for shepherds in adoration scenes, sometimes
facing in the same direction, sometimes in the opposite, i.e. as mirror images of the study. The
exhibition sheds light not only on Rubens’ use of the Städel “tronie” but also on its contemporary reception.
The study which had undergone transformation into a painting of King David turns up at the end of
the seventeenth century in the inventories of Antwerp estates as the work of Boeckhorst alone. Apparently
it received enough attention as such to be repeated – already shortly after its reformulation – as a pictorial
quotation in the painting Abraham Entertaining the Angels attributed to Pieter Thys (Antwerp? 1624 –
1677 Antwerp), a follower of van Dyck. On the basis of illustrations, the topic of Rubens’ use of “tronies”
in general is also examined in the presentation, and with the aid of the head studies themselves – reconstructed
or documented in drawings – their employment in multi-figural history paintings is “decoded”.

This exhibition arose from the preparations for the scholarly inventory catalogue Flämische Malerei im
Städel 1550-1800 presently being carried out by Dr. Agnes Tieze with funding from the Städelscher
Museums-Verein. The technical investigations were performed in collaboration with the conservator
Christiane Haeseler. The x-ray photograph of David was provided by the head of the Städel’s conservation
workshop, Stephan Knobloch. For the exhibition, David was supplied with a new frame constructed after
the example of old models and financed by Ms. Liselotte Schmoll (†) within the framework of an appropriated
bequest to the Städelscher Museums-Verein. The exhibition is the fourth in the “Focus on” series,
which highlights individual masterpieces from the Städel Museum collection. The aim of the series is to
acquaint visitors with various approaches to the perception and interpretation of artworks on the basis of
one particular work and related documentation.

The exhibition is being carried out with generous funding from the Schering Stiftung, Berlin, which
pursues the goal of supporting outstanding achievements in science and art and making them accessible to
the public.