Frans Hals (1582/83–1666) painted no fewer than six civic guard pieces: portraits of groups of armed civilians who, in the seventeenth-century, maintained order as a neighborhood watch and, if necessary, defended the city against attackers. The first portrait of this type dates from 1616 and the last one from 1639. Not many other seventeenth-century Dutch painters are known to have had such a large production. Hals’ loose brush technique and his unique, lively compositions make these paintings a feast for the eye. Frans Hals can therefore safely be called Master of the Civic Guard Piece.

In 1633 Hals received a special assignment from Amsterdam. The officers of the new urban district 11, Captain Reynier Reael and Lieutenant Cornelis Michielsz Blaeuw, commissioned him to make a group portrait of the members of their company. At the time it was highly unusual to award such an assignment to a painter outside one’s own city. 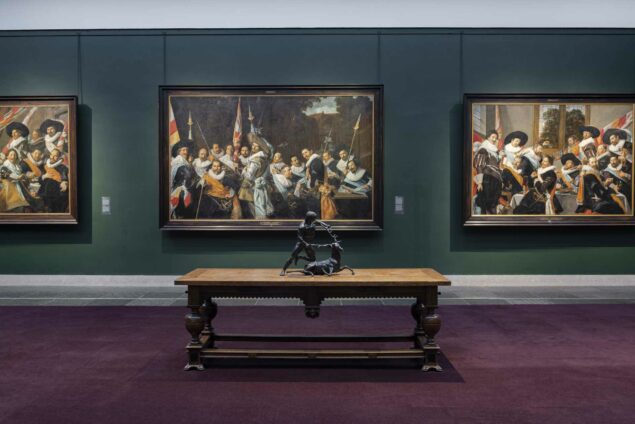 Three years later, the work was still not finished. The officers urged Hals to finish the work, even offered him extra money, but Hals said he did not want to come to Amsterdam. The guard then decided to have the work finished by a painter from within their own ranks: Pieter Codde. Codde had never made a civic guard piece before. He usually painted very delicately and in a small format. For The Meagre Company he tried to imitate Hals’ loose style as closely as possible. He did this so well that to this very day it is not entirely clear which parts were painted by Codde.

The arrival of ‘The Meagre Company’  at the Frans Hals Museum provides a unique opportunity to see all six of Frans Hals’ civic guard pieces at one location and study and compare them using all knowledge and research techniques available. How do the various civic guard paintings reflect Hals’s development as a painter? Who are the persons depicted and what kind of people were they? Why did Hals, being a Haarlem resident, receive the exceptional assignment for this Amsterdam civic guard piece and what was the real reason that he did not finish the work? The Frans Hals Museum helps you to look differently and therefore see more.