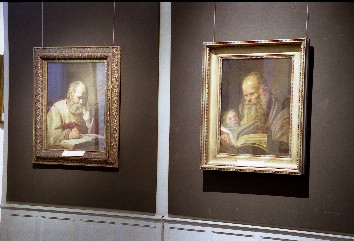 From January 22 to February 20 a somewhat unusual exhibition was held in the Moscow Pushkin Museum of Fine Arts. It included only two paintings from the Odessa State Museum of Western and Eastern Art – the Evangelist Luke and Evangelist Matthew – belonging to the series The four evangelists, created by Frans Hals in the early 1620s. The series was referred to in the 18th century auction catalogues and thus it became known to the historians of art. In 1958 Irina Linnik recognized two paintings in a storeroom of the Odessa Museum as the lost Evangelist Luke and Evangelist Matthew by Frans Hals and traced their history back to the 17th century. Her brilliant find, published in 1959, afterwards helped to discover the other two paintings belonging to the same series (now in the private collection in Germany and in Paul Getty Foundation in Malibou). The Evangelist Luke and Evangelist Matthew were shown in the Netherlands Room of the Pushkin Art Museum among the works by Rembrandt and other contemporaries of Frans Hals. The masterful execution of the paintings, with their easy, fluid brushwork and vivid characters resembling the best genre portraits created by Hals in the 1620s, and the interesting history of their discovery attracted a lot of art-lovers to the exhibition. The exhibition of the Odessa paintings at the Pushkin art museum may be considered a good example of the contemporary exhibition set into the permanent museum exposition.