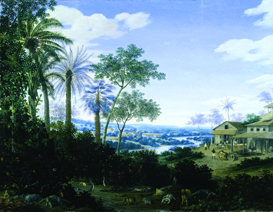 “A douanier Rousseau (customs officer Rousseau) of the 17th century”, a “Brazilian Canaletto” – there has been no shortage of comparisons to describe the fascination caused by Frans Post. At all events, he claims a special place in the history of painting. Born in Haarlem and probably trained by his brother, the architect and painter Pieter Post (1698–1669) following the early death of his father, he went to Brazil at 25 in the retinue of Prince Johann Moritz of Nassau Siegen. In the coastal area around what is now the large city of Recife, power had been held for a few years no longer by the Catholic Portuguese but by the Protestant Dutch, or more precisely the merchant princes of the West Indies Company, who had appointed the prince as Governor. In the trading triangle, sugar and wood were exported to Europe and slaves imported from the west coast of Africa. However, the prince’s efforts went beyond the mercantile interests of the shareholders. In the few years of his government (1637–1644), he expanded the colony according to the principles of a liberal state, and is therefore held in fond memory by modern multicultural Brazil. He owes his posthumous reputation mainly to his personal involvement in science and art. While in Brazil, he commissioned cartographers, naturalists and painters at his own costs with the description of the “parrot land”, which with its enormous richness of species inspired Europeans like a primeval paradise. The expedition was summed up in Caspar Barlaeus’s report Rerum per octennium in Brasilia gestarum historia (1647), to which Post contributed 32 illustrations (the sketches are today in the British Museum in London). Unfortunately, only a fraction of what Post must have produced in Brazil has survived: drawings of a sugar mill (Rotterdam, Atlas van Stolk), a Dutch-Portuguese battle (in private ownership) and seven paintings of fortified sites that probably once embellished the Prince’s Residence (Colección Cisneros, Caracas; Royal Cabinet of Painting, The Hague; Musée du Louvre, Paris; Instituto Ricardo Brennand, Recife). Due to their almost photographic realism, these works are among the most valuable painted testimonials of the epoch.

After returning from Brazil, Post soon found and filled an exotic niche with his Brazilian landscapes on the art market, and was no longer dependent on court commissions. In Haarlem, where landscape painting by numerous masters such as Jacob van Ruisdael (1628/29–1682) prevailed, he transformed his accurate nature sketches into decorative works of art that met the expectations of the sophisticated Dutch public. In this way, he introduced America to European painting. At the same time, he further developed his art: around 1644–1650, he fell back on drawings he had produced on site in order to provide the true-to-life pictures of a recently returned witness to a public prepared by current travel reports. In the 1650s, he oriented his work more to the style of other masters such as Cornelis Vroom (ca. 1591–1661) and began to vary his own compositions. He reached the pinnacle of his career in the 1660s, just as the Dutch had ceded their Brazilian colony back to the Portuguese and were looking back on their Paradise Lost. Post now produced a downright encyclopedic abundance of motifs of Brazilian flora and fauna under a radiant blue, “romantic” sky. Astonishingly, and despite his age, he succeeded once again in striking a new, melancholic tone. His mainly rural scenes of the late years up to 1680 frequently capture an ephemeral evening mood.

Since his rediscovery about a century ago, Post has repeatedly awakened the interest of collectors and researchers, at first in Brazil, and soon afterwards in Europe and in the USA. He is a subject of study not only for art historians but also for ethnologists, botanists and zoologists. Following the presentation in Basle and Tübingen (1990) and a small exhibition concentrating on the Nassau donation to Ludwig XIV, which opens in the Louvre on September 28, 2005, the Haus der Kunst is dedicating a monographic exhibition to the painter for the third time in Europe. The painter’s work, which is of both historical and artistic interest, should thereby reach a wider public and become more available for international research.

The artist’s development outlined here is demonstrated in the exhibition with the aid of around 30 paintings and 20 sketches. The strictest standards of quality, state of preservation and authenticity were applied in selecting the exhibits. Especially for the exhibition, public museums and private collectors in Europe and abroad have provided their most valuable works, which have never before been available for study in such large numbers. The curator of the exhibition, León Krempel, is a connoisseur of Dutch painting of the 17th century, and is assisted in the project by Bia and Pedro Corrêa do Lago, who in 2006 will publish a “Catalogue Raisonné” of the works of Frans Post.

Frans Post first saw Brazil through the eyes of a colonist. Later he adapted his views and impressions to the European landscape concept. What happens when eyes conditioned to other circumstances follow his traces? With the support of the Centro Cultural Brasil–Alemanha (CCBA) in Recife and the Kunststiftung NRW, a young artist paints and draws the places Post visited. Rosilene Luduvico grew up in a mountain village without electricity near Belo Horizonte. At the same age as Post when he crossed the Atlantic, she began her studies at the Düsseldorf Academy of Art, which she left in 2003 with a mastership. Her inspired landscapes continue the tradition of Guignard, one of the great Brazilian painters of the 20th century, who has studied at the Munich Academy of Art and thus also belongs to the South America/Europe cultural axis. The successes of the expedition of Rosilene Luduvico are shown in an exhibition within the exhibition.