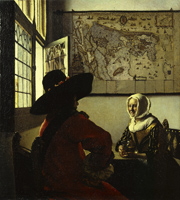 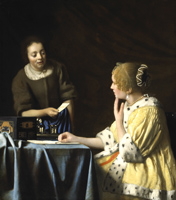 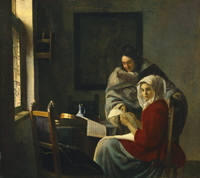 Temporary summer installation brings three masterpieces together and examines the role of Henry Clay Frick as a collector of the artist’s work: Frick’s Vermeers reunited

“One of the greatest of all prizes of the picture collector—a fine work of Jan Vermeer of Delft” (W. Roberts, The Connoisseur, November 1912)

Particularly beloved among the paintings at The Frick Collection are its three works by Johannes Vermeer (1632–1675), Officer and Laughing Girl, Mistress and Maid, and Girl Interrupted at Her Music. These rare canvases
were purchased by Henry Clay Frick before his death in 1919 and have
hung in the Fifth Avenue mansion ever since. This summer, the
institution offers visitors their first opportunity in nearly ten years to
examine the paintings together on one wall. Their presentation in the
South Hall will be accompanied by a panel that traces Frick’s interest in
the artist and places him in the context of other early American
collectors of Vermeer’s work. An education program involving Colin B.
Bailey, Associate Director and Peter Jay Sharp Chief Curator, is planned
for September; the summer Members’ Magazine features an illuminating
essay on the market for Vermeer’s paintings, written by Esmée
Quodbach, Assistant to the Director of the Center for the History of
Collecting in America, an initiative based at the Frick Art Reference
Library. This special summer installation, Frick’s Vermeers
Reunited, runs through November 2, 2008.

Comments Colin Bailey, “We are delighted to place special focus this summer on the institution’s works by Vermeer and to enlighten visitors on the taste for this artist in America. Frick could claim responsibility for bringing to America its fourth authentic Vermeer, and his interest in the artist ultimately resulted in the acquisition of three fine canvases, a remarkable number with regard to his total accepted production of fewer than forty paintings. We hope our visitors will enjoy seeing the works side by side in this temporary presentation.”

The “Sphinx of Delft” emerges

Although the name of the artist Johannes Vermeer is widely known today — his art is the subject of countless books, television programs, and films — recognition of the artist by art historians evolved largely in the nineteenth century. As late as 1834, the London dealer John Smith listed “Vander Meer, of Delft” among the “scholars and imitators” of Gabriel Metsu in his renowned Catalogue Raisonné of the Works of the Most Eminent Dutch, Flemish and French Painters. He noted that other writers seemed to be “entirely ignorant” of this “excellent” artist, whose pictures showed “much of the elegance of Metsu, mingled with a little of the manner of De Hooge.” Smith mentioned specifically one painting by “Vander Meer,” the View of Delft, which he described as “superb.” In 1822, the picture had been acquired at a public sale for the grand sum of 2,900 guilders by the State of the Netherlands, at the behest of Willem I. It was placed on view at the Royal Picture Gallery in The Hague, now better known as the Mauritshuis, where it remains to this day.

An important turning point in the history of the taste for Vermeer came when the French art critic, journalist, and politician Théophile Thoré (1807–1869) paid a visit to the Royal Picture Gallery and had his first and unforgettable encounter with the View of Delft, sometime around 1842. “In the Museum at The Hague, a superb and most unusual landscape captures the attention of every visitor and makes a vivid impression on artists and sophisticated connoisseurs,” Thoré wrote in the Gazette des beaux-arts, almost a quarter of a century later. “It is a view of a town, with a quay, an old gatehouse, buildings in a great variety of styles, walls and gardens. . . .” The “strange” painting surprised Thoré, he confessed, as much as the famed Rembrandts on view. Not knowing to whom to attribute the arresting cityscape, he consulted the museum’s catalogue: “‘Jan van der Meer of Delft.’ Heavens! Now there is someone we don’t know in France, and who deserves to be better known.” Thanks to Thoré’s enthusiasm for the forgotten painter and to his tireless quest during the next two decades to locate his works, interest in Vermeer grew. While the artists of the French avant-garde were among the first to embrace the “Sphinx of Delft,” as Thoré nicknamed him, it took almost half a century before a wider audience discovered Vermeer.

America came by its first Vermeer in 1887, when the New York financier Henry Marquand bought the splendid Young Woman with a Water Pitcher, formerly in a private collection in Ireland, for a mere $800. He gave the painting to The Metropolitan Museum of Art in 1889, the year he became that institution’s second president. The
picture is generally thought to be the best of the five Vermeers now in the Metropolitan’s holdings. Another Johannes Vermeer, Girl Interrupted at Her Music,The Concert, which earlier had been part of Thoré’s collection, crossed the Atlantic a few years later, in 1892, after Isabella Stewart Gardner of Boston purchased it for 29,000 francs (about $5,800) at the Thoré estate sale
in Paris. (This, by the way, is the Vermeer that was stolen from the Gardner museum in 1990.) A third Vermeer, Woman with a Lute, was brought to America shortly before the turn of the century by the New York financier Collis Huntington. Remarkably, Huntington later told The New York Times that he had known “nothing” about Vermeer or his growing reputation when the picture was offered to him in Paris; he simply “took a fancy” to it, purchasing it for a scant 2,000 francs (about $400). It was part of Huntington’s 1900 bequest to The Metropolitan Museum of Art.

Frick as a collector of works by Vermeer

Henry Clay Frick bought his first Vermeer, Girl Interrupted at Her Music, in the summer of 1901, when he was still living in Pittsburgh. He had started buying large numbers of pictures by the mid-1890s, the great majority of which belonged to the modern French schools. These were conventional contemporary works of the sort that were sought out by fellow collectors in Pittsburgh, New York, Boston, and
elsewhere in the United States. It was not until 1896 that Frick acquired his first Old Master picture, Still Life with Fruit by Jan van Os, a minor eighteenth-century Dutch painter, for which he paid $1,000. (The painting is now at the Frick Art and Historical Center in Pittsburgh.) By 1901, he owned a handful of Old Masters; among these, most notably, was Portrait of a Young Artist of about 1647, supposedly by Rembrandt, purchased in 1899 for the considerable sum of $38,000. (The painting remains in The Frick Collection, although it is now attributed to an unknown follower of Rembrandt.)

By all accounts, Frick’s 1901 acquisition of Vermeer’s Girl Interrupted at Her Music seems to have been a wise although not a calculated decision. Perhaps his interest in the picture was sparked by the recent attention received by Vermeer’s work, both in America and in Europe, or even by the growing fame of Théophile Thoré. Certainly, Frick (or his dealer, Charles Carstairs of Knoedler) may have been drawn to the Girl Interrupted at Her Music for purely aesthetic reasons. Whatever his motivation, Frick paid Knoedler $26,000 for the Vermeer, a high price when compared to the amounts his contemporaries had spent for their Vermeers. As was common practice, the Girl Interrupted at Her Music, which had been in a private collection in Britain for almost a half century, was thoroughly cleaned shortly before it was sold. As a result, a violin hanging on the back wall, described in the 1810 auction catalogue, was removed by the restorer, who judged it a later addition. The birdcage to the right of the window, which may not be original to the painting either, was left intact. Although Frick probably was not aware of the fact, the Girl Interrupted at Her Music was only the fourth authentic Vermeer to come to America.

Frick bought his second Vermeer a decade later, in 1911 — one of the best years ever for the sale of Old Masters in America. By then, Frick was living in New York, where he had rapidly established himself as one of the world’s great collectors of Old Masters, paying top prices for major Dutch works such as Rembrandt’s 1658 Self-Portrait, purchased in 1906 for $225,000, and his Polish Rider, acquired in 1910 for nearly $300,000. Prices for Vermeer had jumped spectacularly in the century’s first decade, and a price of a few hundred dollars, or even a few
thousand, for one of the artist’s rare works was, by now, unthinkable.

Early in 1911, the industrialist P.A.B. Widener of Philadelphia — who was a business acquaintance of Frick’s as well as one of his major collecting rivals — paid $115,000 and exchanged four paintings for a recently discovered Vermeer, Woman Holding a
Balance (National Gallery of Art, Washington, D.C.). Later that year, Frick paid Knoedler almost twice that amount for the exquisite Officer and Laughing Girl, thereby setting a new record price for a Vermeer. Interestingly, Frick returned a pair of early Rembrandt portraits to his dealer shortly before he made his second Vermeer purchase; he received a credit of $175,000 for the Rembrandt pendants, which was then taken as a first payment for the Officer and Laughing Girl. It was around this time that Wilhelm von Bode, the distinguished German scholar and
museum director, wrote in The New York Times that a painting by Vermeer was “the greatest treasure for an American collector.” According to Bode, Vermeer’s popularity was due, in part, to the fact that his feeling for light and color came especially close to “our modern feeling” and also because his paintings were so extraordinarily rare.

Not long afterward Frick was on the lookout for a third Vermeer. In the spring of 1914, the London dealer Arthur Sulley wrote on his behalf to James Simon, a well-known Berlin collector, asking if he would sell his celebrated Vermeer, Mistress and Maid, for £50,000 (about $250,000). Simon, however, showed no interest in parting with the pearl of his collection, as Sulley reported to Frick: “He replies that no offer would tempt him to sell the Vermeer, and that he has already refused an offer of £50,000 several times.” A few years later, however, a reversal of fortune—occasioned by the devastation of World War I — forced Simon to sell many of his paintings. In 1919, with the help of the dealer Joseph Duveen, Frick bought Simon’s cherished Vermeer, paying more than $290,000.

Mistress and Maid was Frick’s last purchase, and the only one he made in the year of his death. Although he was able to enjoy his third Vermeer for only a few brief months, it was one of his personal favorites.