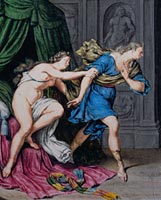 From Rembrandt to van Gogh presents a selection of highlights from The Morgan Library & Museum’s outstanding collection of Dutch drawings from the seventeenth through nineteenth centuries. When Pierpont Morgan (1837–1913) purchased the Fairfax Murray collection of old master drawings in 1909, he acquired one of the most substantial groups of Dutch drawings from the seventeenth century—the golden age of Dutch art—which also included important sheets by eighteenth-century artists. Since the Morgan’s founding in 1924, the collection has grown significantly and now extends into the nineteenth century. The Morgan now preserves one of the most comprehensive groups of Dutch drawings in the country. Comprising nearly fifty drawings spanning three centuries, the exhibition celebrates the contemporaneous publication of the catalogue raisonné of the Morgan’s Dutch drawings.

From Rembrandt to van Gogh begins with drawings by seventeenth-century artists active in Holland. Principal themes of Dutch art emerge in portraits by David Bailly and Jan Lievens, a marine view by Hendrick Avercamp, and pastoral scenes by Nicolaes Berchem. Topographical views by Jan de Bisschop and Claes Jansz. Visscher reflect the Dutch interest in close and accurate observation. A concern for natural history is revealed in a drawing of tulips, for the cover of a bulb catalogue by Anthony Claesz II and Maria Sibylla Merian’s depiction of a Surinam lizard. Genre scenes of alehouse interiors by Adriaen van Ostade reveal the humorous aspect of Dutch art. Rembrandt’s achievement as a draftsman is represented by five sheets, accompanied by selections from the Morgan’s rich collection of drawings by the artist’s pupils, which serve to fully illustrate the master’s influence. The Dutch landscape is a recurrent subject in exhibited drawings by Rembrandt, Aelbert Cuyp, Allart van Everdingen, Jacob van Ruisdael, and Herman van Swanevelt.

The continuing tradition of draftsmanship during the eighteenth and nineteenth centuries is chronicled by a selection of sheets, including Italian landscape views by Caspar van Wittel and Isaac de Moucheron, a genre scene by Cornelis Troost, a powerful head study by Jacob de Wit, pastoral scenes by Jacob Cats and Jacob van Strij, and a watercolor view of the interior of the Oranjezaal (a room in the royal château Huis ten Bosch) by Tieleman Cato Bruining. A luminous vanitas image on vellum by Herman Henstenburgh and a robust study of flowers by Jan van Huysum are characteristic of the ongoing interest in still-life subjects. The exhibition concludes with two landscapes by Vincent van Gogh, the greatest Dutch-born artist of the nineteenth century.