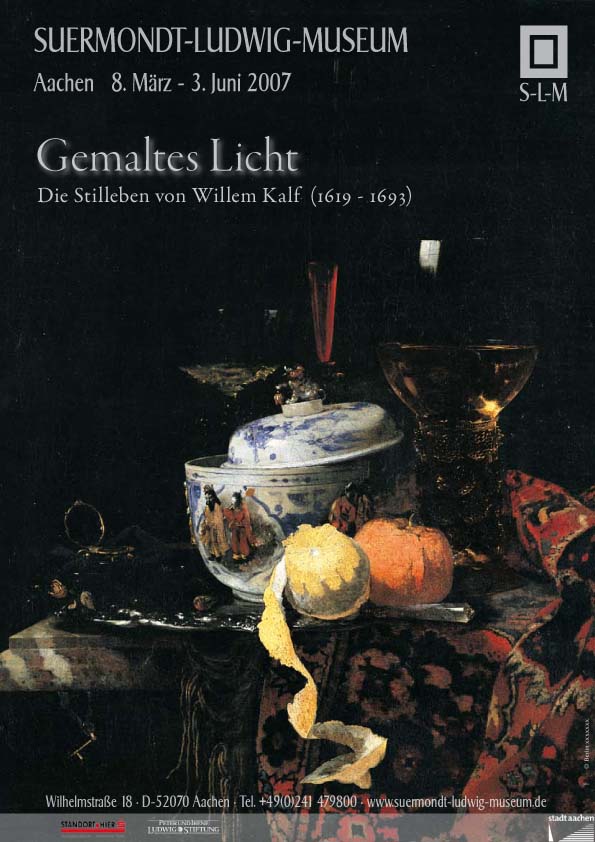 The Suermondt-Ludwig-Museum in Aachen, in cooperation with the Museum Boijmans Van Beuningen in Rotterdam, is showing for the first time the major works of Willem Kalf, the most important Dutch still-life painter of the “Golden Age”. Loans from many museums and private collections in Europe and the USA have helped to make possible this first-time presentation of 40 of his works in a comprehensive monographic exhibition.

The still-life painter Willem Kalf was a master of thematic variation. His paintings are the expression of an intensive quest for the ideal effect achievable by means of a particular composition of objects.
It is recorded in the belles-lettres of the 17th century that Kalf’s artistic virtuosity and the exquisite repertoire of subjects portrayed in his paintings were highly esteemed by his contemporaries. Appreciation of Kalf revived again at the end of the 19th century when the light in his paintings was compared to the light in the works of Rembrandt and Vermeer.

Both Holland and France were the locales of Kalf’s artistic career. Born in 1619 in Rotterdam into a family of well-to-do merchants, he went in the early 1640s to Paris, where he used a home-town subject, the “farm interiors”, to demonstrate his skill, quickly making a name for himself among art collectors. The “interiors” were small paintings in which human figures played a subordinate role. The artist’s primary concern was to put still lifes in a picturesque rustic setting.

In Paris Kalf began to paint pure still lifes, some of them on large canvasses and resplendent with precious metals, accordingly described as Pronkstilleven or opulent still lifes. These paintings mostly show pewter, silver and gold objects, selected by Kalf in order to demonstrate the effect and reflection of light on metallic surfaces.

In Amsterdam, where he lived from 1653 until his death in 1693, Kalf created the paintings that established him as a “Vermeer of still-life painting”: artful arrangements of choice and rare treasures, set off by a masterly use of lighting. Fruits and their intense colours become dominant motifs in many of Kalf’s Amsterdam still lifes: Objects of nature and of the crafts mysteriously and luminously emerge from the dark backgrounds of the paintings. The fascinating play of light on myriads of varying surfaces – their reflections, refractions or transparency – becomes the real theme of his art.