There are two surviving, virtually identical versions of Gerard ter Borch the Younger’s (1617–1681) Gallant Conversation (also known as The Paternal Admonition), with one version held in the collection of the Gemäldegalerie in Berlin, and the other in the Rijksmuseum in Amsterdam. A special presentation at the Gemäldegalerie will reunite the two pictures for the first time in more than 350 years, exhibiting them side by side for audiences to compare and contrast.

From around 1648 onwards, Ter Borch specialized in genre painting. Like almost no other painter of his era, he was able to reproduce the visual effect of the shimmering satin clothing of his subjects with such deceptive and convincing mastery that people referred to his interiors as “satijntjes”, or “satin pieces”. His most significant work in this series is his Gallant Conversation, in which the shimmering silver dress and its artfully arranged folds form the central focus of the image. The optical and tactile allure of the dress enters into a highly seductive interplay with the intriguing figure who stands with her back toward the viewer. 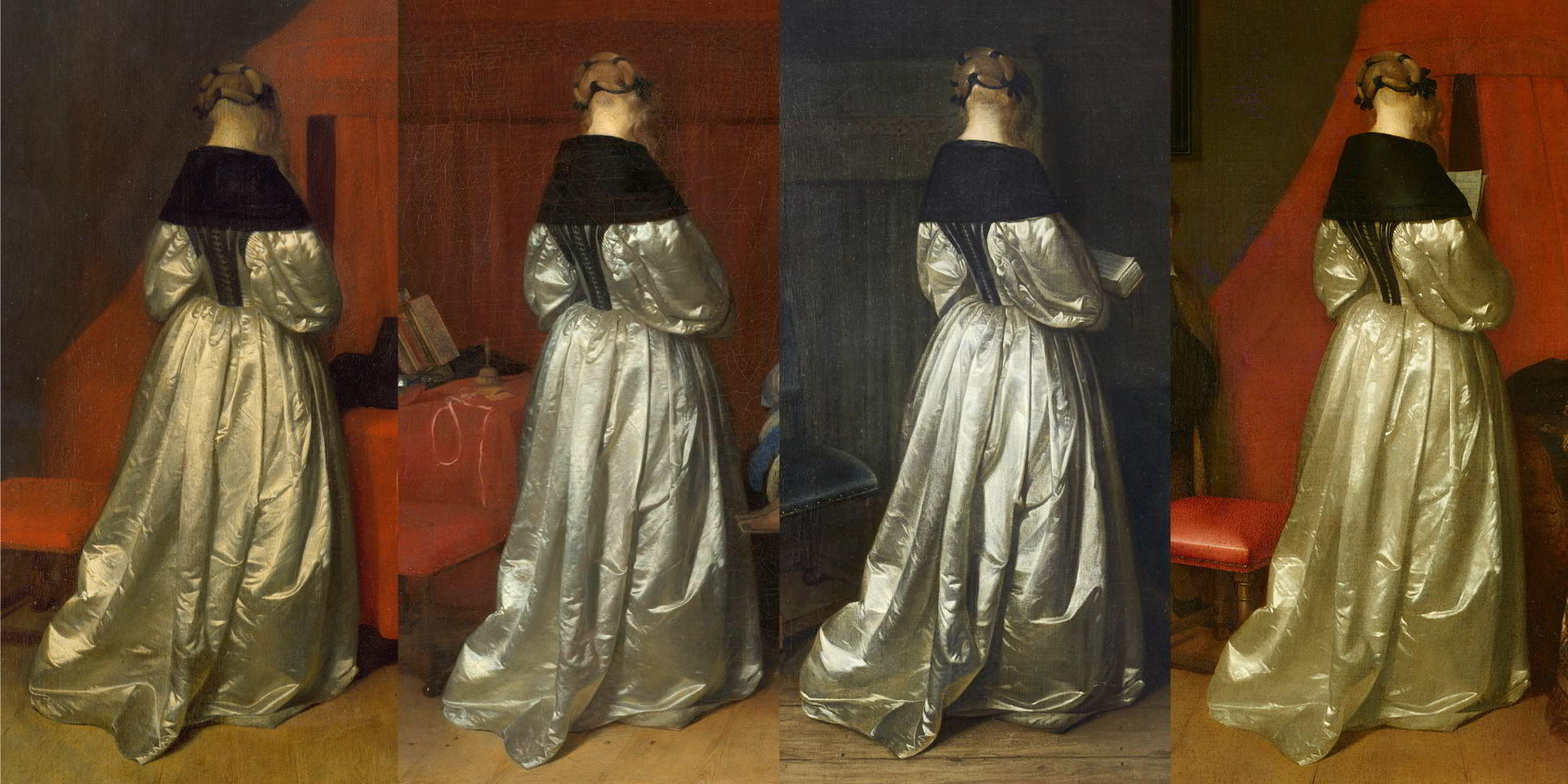 No less than 24 repetitions, partial copies and imitations attest to the extraordinary popularity of this depiction, in particular the figure in the white satin dress facing away from the viewer. Ter Borch himself made at least two almost identical versions of Gallant Conversation, which are now being exhibited together for the first time. They are complemented by a loan from the Gemäldegalerie Alte Meister Dresden as well as two loans from private collections, which are all attributed to Ter Borch or his workshop, and which feature the backward-facing figure of the young woman in altered, simplified compositions. The illuminating encounter of these altogether five works does not just enable viewers to study Ter Borch’s refined and efficient painterly technique through a direct comparison; the presentation also shines a spotlight on the savvy marketing of his remarkably flexible choices of subject matter, motifs and pictorial composition.

The meaning of the scene in the painting remains somewhat enigmatic. Conflicting with the earlier reading, there is significant evidence to suggest that the scene actually depicts an amorous seduction – something that is also reflected in other “conversation pieces” in the Gemäldegalerie. But one of Ter Borch’s most characteristic talents lies in his subtle treatment of his subject matter and his deliberate depiction of ambiguous moments. It is this ambiguity that explains how the scene of seduction could have been given the title The Paternal Admonition in the 18th century. In the special presentation this will be illustrated by J.G. Wille’s reproductive print of 1765, which was also the source for Johann Wolfgang von Goethe’s famous description of the “fine, striking figure, in a folding drapery of white satin” in his novel Elective Affinities.

Information from the curators, 10 Septmber 2019