The museum’s founder, Henriette Mayer van den Bergh (1838–1920), spent the First World War in the Netherlands. During her absence, she entrusted the institution to Baron Auguste Delbeke. The museum probably remained closed during the first years of the conflict: no one signed the visitor’s book in that period, and two pages were left blank. The first signatures appear again in March 1917. That year, and the one that followed, six pages were filled, including the names of eighty German visitors. Who were they? This ‘Summer Focus’ tells their fascinating story.

The outbreak of the First World War in the summer of 1914 was accompanied by a great deal of violence and destruction. Cities were torched and the advancing German troops were guilty of frequent cruelty. The burning of the university library in Leuven in late August came to symbolize the first months of the war. A great deal of cultural heritage was lost and the international reaction was one of shock. It did not take the occupying authority long to realize how harmful such events were to its image. Germany had previously been admired throughout Europe as a modern nation, but the idea now took hold of Germans as ‘barbarians’. One of the initiatives taken to alter this perception took the form of an official heritage protection policy: the Kunstschutz.

Its principal task was to catalogue key monuments and works of art that had to be removed to safety or else protected in situ if they risked coming into the line of fire. The Kunstschutz in Belgium went a step further, also photographing the works. German architects, art historians and photographers visited numerous towns and cities in 1917 and 1918 to carry out this work. The project resulted in a series of almost 11,000 photographs. When the war ended, the original glass negatives were sent to the art-historical institutes in Bonn and Berlin. The Belgian government purchased the entire collection in 1927 and the negatives were placed in the Royal Institute for Cultural Heritage (KIK-IRPA) in Brussels. KIK-IRPA recently digitized the collection and placed it online as part of the commemoration of the First World War. 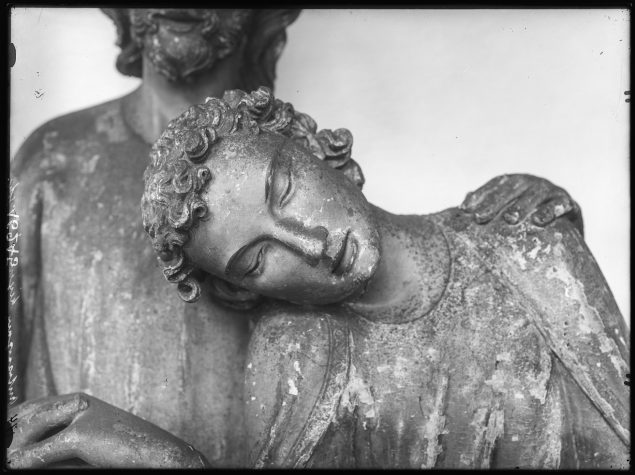 We know from the visitor’s book that leading figures from the Kunstschutz committee visited the museum several times: Paul Clemen, Erwin Hensler, Hugo Kehrer, Martin Konrad, Julius Baum. The photographer Paula Deetjen and the art historian Grete Ring also visited the museum, as did several other members of the committee. As part of the project, Jozef Apers (1882–1963) took 106 photographs of the museum’s sculpture collection. Apers produced his photographs with great care, showing an accomplished eye for detail and perspective.