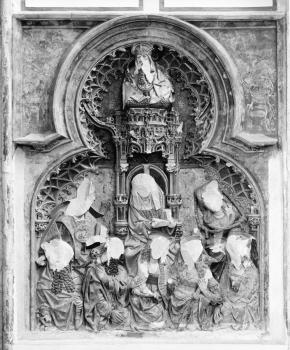 The hundredth exhibition in Stedelijk Museum Bureau Amsterdam (since 1993) is devoted to the work of Amsterdam photographer Gert Jan Kocken. He is showing a series concerned with iconoclasm: photographs that focus attention on the fury that images have provoked in the past. In doing so, he poses questions about the way the image exercises its power today.

In his work Gert Jan Kocken (1971, Ravenstein) places history and memory in relation to the image. He began his Disaster Sites series in 1999: using a view camera, he photographed various locations where a great disaster had once occurred, printing the photographs in large format to produce a monumental, detailed image. Because the photographs were made long after the disaster involved, there is nothing more to be seen than a landscape, and there is only the memory of what took place at this specific location.

For instance, the majestic views of the slope of Mont Blanc, with the entrance to the tunnel of the same name, or the sea at Zeebrugge, or the park-like space in the midst of the Bijlmer receive a certain charge – a tension between the aesthetic image and what collective memory knows about the place. A similar series was to be seen in the group show ‘Something Happened’, which Stedelijk Museum Bureau Amsterdam (SMBA) assembled with work by Kocken for the Amsterdam Art Fair in 2004, this time with life-sized photographs of places in Amsterdam where a murder, suicide or a shocking disclosure had taken place. At first glance all are ordinary locations – with, however, a charged history.

Charged history is also the subject of a new series of photographs by Kocken, on the theme of Turning Points. Most of these works do not address recent collective memory directly, since they deal with a period which lies over four centuries behind us. Specifically, this is the case for the series of photographs of religious objects that were destroyed during the Reformation in northwestern Europe in the 16th century. The primary motive for the destruction was the Second Commandment, ‘Thou shalt not make for yourself any graven images, or any likeness of any thing that is in heaven above, or that is in the earth beneath, or that is in the water under the earth; thou shalt not bow thyself down to them, nor serve them.’

The Beeldenstorm (Image War) which raged across Europe in several waves, was not only a pedagogic demonstration of the material aspect of the images of saints (in contrast to their presumed sacrality), but also an expression of fury against the fraudulent Roman authorities, which was first inspired by Erasmus and Luther, and later intensified and radicalised by Zwingli, Calvin and others. It is striking that, while to be sure much has been written about the history of the Reformation, and thus about the Beeldenstorm, the damaged artifacts which have survived on the spot (reliefs and paintings) and, for instance, scratched out missal texts, have seldom if ever systematically been illustrated – and certainly not in the painstaking manner in which Kocken has done that.

For his work Kocken first performed extensive research into the various locations ravaged by the Beeldenstorm. Next he made his photographs – including shots in churches in Utrecht, Zwolle and Breda in The Netherlands, Münster in Germany, Geneva and Glarus in Switzerland, and Norfolk and Suffolk in England. He then printed the photographs of the objects involved at almost actual size. The sharpness of the prints and their format give them a material quality that closely approaches that of the original sculptures and paintings, and makes them even better and more easily visible than in their location in churches, or in museum depots. With the artifacts removed from their ecclesiastical or museal context, in the exhibition the emphasis comes to lie on the faces of the saints, chiselled away or scratched out in a way that is as malicious as it is meticulous, while the rest of the image remains almost entirely intact.

The precision with which this has been done to the works photographed by Kocken makes it clear that iconoclasm is not by definition a matter of wanton destruction. The history of iconoclasm is very closely interwoven with theological and philosophical ideas that may differ by time and place, but which are often quite profoundly rational. It began with the iconoclastic controversy in the Byzantine Empire, which ran on nearly a century after 726, the year that the Emperor Leo III had a mosaic of Christ that was above the entrance to his palace removed in favour of a simple cross. This interweaving of iconoclasm and religion continued through modern, abstract art by Kandinsky, Malevich, Mondrian and others. [1]

Iconoclasm took on a symbolic, aesthetic form in the work of these artists. Over the centuries most forms of iconoclasm have however gone down in history as instances and examples of the act of destruction, and not so mush the specific remains of the deed. In other words, iconoclasm is mostly understood to be just blind vandalism, and has therefore become a taboo in the modern context of far-reaching musealisation and conservation of art and a constantly expanding system of historical preservation. [2]

A textbook example of the sort of precision destruction that Kocken records is the St. Anna retable found in the Domkerk in Utrecht. It is a large relief from around 1500 which is high on one of the pillars of the former cathedral. It depicts Anna, the mother of Mary, seated on a throne and surrounded by her relatives. Mary is seated directly below her. Astonishingly, the eyes of God the Father, who towers above this whole scene, have been spared, but the faces of the other figures have been completely obliterated. The infant Jesus has entirely disappeared from the arms of Mary. All the other details of the relief from which it derives its exquisite immaterial quality, including the polychromy in gold and blue, are still visible in their full glory, and give an impression of the importance that devotion to Mary had attained in the late Gothic era (and which, on the other side, was so fiercely criticised by the Reformers).

A wood panel of Mary in Geneva received similar precise treatment: the faces of both the Virgin and the Child have been carefully chiselled away exactly within their contours, so Mary’s luxuriantly curling hair has been beautifully spared. On a stone relief of Mary and the Christ Child floating on a cloud, with saints and the donor below (in the St. Michael in Zwolle), only the architectural background and the cloud have been spared, giving the image a marvellous, abstract quality.

That it was not only Mary, but also the Pope, who was in the line of fire becomes clear from the treatment of a painted panel from the late 15th century in the collection of the Stadtmuseum in Münster. It depicts a vision of the suffering of Christ that Pope Gregory the Great (6th century) received during a Mass. The eyes of the Pope and all the saints and Church Fathers surrounding him have been gouged out – except those of the suffering Christ himself, and two anonymous figures in the background. The photographs of pages from missals in the Royal Library in Louvain are of an entirely different nature. Florid lines have been scratched, or whole columns have been partly obliterated with red chalk on the pages dealing with the Pope and Luther. Given the nature of these interventions, it was not the case that the perpetrator felt that the text must no longer be read at all. The scratches were apparently intended as an unmistakable critique of the commentator involved.

Just as in modern art, but with the methodology of a documentary photographer added, Kocken aestheticises the iconoclasm and still poses questions about the motives for it. As it were, he brings the visual facts of an important period in the history of religious wars – a period which marked the creation of an independent Netherlands – into our own day. He does that precisely in a time of when iconoclasm once again is playing an important role. Perhaps the most significant example is the demolition of the statues of Buddha at Bamiyan by the Taliban, and especially the images of this which went out all over the world on the news.

In the SMBA exhibition that relation is made drawn by an entirely anomalous photograph by Kocken of the front page of the New York Times on the day that the destruction of the Twin Towers in New York took place: nothing yet about the attack itself, but several small stories about the perils posed by the Middle East and Afghanistan. In retrospect, there were enough signs to indicate that possibly ‘something’ was in the offing.

Kocken’s work is reason for the SMBA to pose questions about the meaning of iconoclasm in our society today. These questions are closely associated with the debate about cultural diversity in The Netherlands, and attempts to enlarge this – until now rather limited – debate by making connections with visual culture. The Bamiyan question, but also the riots over the Danish Muhammad cartoons, the controversy about a bikini advertisement in Utrecht, recent complaints about the use of female nudes in advertising and video clips in general, and even (although it was motivated by promise of quick money) the vandalism of Rodin’s bronze The Thinker in Laren, photographed by Kocken in its damaged state: these can all be omens of a new iconoclastic controversy which, just as in Byzantine times, is much more deeply rooted than we are at first inclined to think. By way of a kick-off, in his essay for SMBA Newsletter art historian Sven Lütticken traces various theoretical perspectives on iconoclasm. In the debate that the SMBA is organising for Museum Night on November 3, there will be a discussion of the relation between the iconoclasm controversy and various political, religions and social currents. And also in the near future the SMBA will be returning again to the ‘image debate’.

‘Defacing’ by Gert Jan Kocken is to be seen in Stedelijk Museum Bureau Amsterdam through November 11, 2007. SMBA Newsletter nr. 100 will appear to accompany the exhibition, and contain this introduction and an essay by art historian Sven Lütticken. As part of Museum Night, on November 3 the SMBA will host a discussion of modern iconoclasm. For more information: www.smba.nl

2. See for a concise explanation about the difference between iconoclasm and vandalism: Dario Gamboni, The Destruction of Art. Iconoclasm and Vandalism since the French Revolution, Reaktion Books London, 1997, p. 17-20. In this publication Gamboni offers a summary of vandalism and destruction of art since the French Revolution with the underlying motivations.