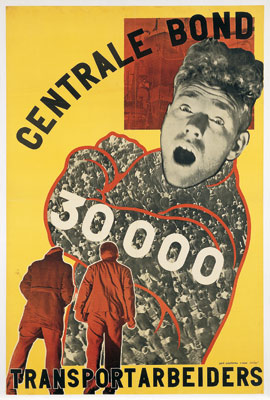 A variety of factors made twentieth-century Dutch graphic design stand out from that in other countries. Clearly, though, the particularly receptive nature of Dutch clients and audiences played a pivotal role.

One of many such clients was Berend Modderman, owner of the Amsterdam printing firm Ipenbuur en Van Seldam, who commissioned artists such as Theo Molkenboer to design posters for his company. Molkenboer’s 1897 poster for the Amsterdam bookbinder Elias P. van Bommel, created as a woodcut, displayed a Calvinist simplicity unusual for Dutch graphic design of that period.

Another discerning early patron of Dutch graphic design was Klaas Groesbeek, manager of the Amsterdam bookstore Scheltema en Holkema’s Boekhandel. In 1893, Groesbeek had the insight to ask G.W. Dijsselhof to design Kunst en samenleving (‘Art and Society’), which in turn became one of the masterpieces of Nieuwe Kunst, the term for Art Nouveau in the Netherlands. Nieuwe Kunst was greatly influenced by the crafts of the former Dutch East Indies colony that today is Indonesia. In addition to Dijsselhof, major Nieuwe Kunst artists included Theo van Hoytema, Chris Lebeau, Johan Thorn Prikker, C.A. Lion Cachet, R.N. Roland Holst, and Jan Toorop. In The Hague, the publisher L.J. Veen, a passionate patron of modern Dutch book design, commissioned Lebeau to design De stille kracht (The Hidden Force). With its batik binding, De stille kracht was largely responsible for the popularity of that East Indian medium in the Netherlands. Veen also gave many design commissions to the painter Toorop, whose homeland, the Dutch East Indies, was a special source of inspiration for the artist.

C.J. Schuver, director of the Koninklijke Stoomsteendrukkerij Amand, happened upon a mural by the painter Johann Georg Van Caspel in an Amsterdam artists’ pub. Recognising Van Caspel as a potentially significant poster designer, Schuver immediately asked him to produce work for his company. One of Van Caspel’s most striking designs for Schuver is the 1900 poster for Boon’s geillustreerd magazijn (Boon’s Illustrated Magazine), whose image is repeated on the cover of the magazine in a woman’s hands. This in turn shows it in a smaller size, like a Russian egg toy containing smaller replicas of itself.

The ethereal posters of the decorator and Rijksacademie director R.N. Roland Holst concerned subjects such as socialism and theatre and were aimed at a small elite and devoted clientele. In contrast, Albert Hahn’s for the Social Democratic Workers Party had the impact of visual sledgehammers and were immensely popular among the socialist electorate.

With Piet Mondrian and other kindred spirits, Theo van Doesburg began the De Stijl movement in 1917, advocating the idealistic goal of liberating art from qualities such as subject matter, subjectivity and decoration. Although De Stijl first addressed a limited yet sympathetic audience, it was to have a lasting effect upon twentieth-century page design.

Under the auspices of the Amsterdam art society Architectura et Amicitia, the architect H. Th. Wijdeveld started the monthly magazine Wendingen in 1918. For fourteen years, it would present a wide range of contemporary art topics to its subscribers. Although Wijdeveld designed the layout and three of the covers, he gave many artists and architects an opportunity to use the covers as a venue for their work. They included Roland Holst, Anton Kurves, W.M. Dudok, Toorop, Lebeau, Anton Kurvers, Vilmos Huszár, and the Russian constructivist El Lissitzky.

In 1923, the board of directors of the Nederlandsche Kabel Fabriek (Dutch Cable Factory) took the bold initiative of hiring the controversial constructivist Piet Zwart to produce advertisements and other printed matter for their company. For ten years, Zwart’s work for the NKF represented some of the most innovative designs of the Dutch avant-garde. Considering the generally low state of Dutch corporate design of that period, this step by the NKF directors was astounding indeed. Another intrepid client was the Rotterdam publisher W.L. & J. Brusse, who did not hesitate to give commissions to graphic designers with widely diverse philosophies, such as Zwart and S.H. de Roos, an outspoken proponent of traditional typography. Besides Zwart, the other pre-eminent Dutch constructivist was Paul Schuitema, whose Rotterdam clients included the printer C. Chevalier and the Van Berkel companies dealing in meat and scale products. His work for these companies raised everyday commissions to new heights of dynamism.

Book designers committed to traditional typography constituted an alternate movement promoting classical design principles. This consisted mainly of five principal individuals: S.H. De Roos, Jean François van Royen, Charles Nypels, A.A.M. Stols and the totally unrelenting Jan van Krimpen. They contended that book designers should serve the writer and reader and not cheapen typography by using it for personal expression. This stance was to kindle an interminable ideological conflict with the approach of the constructivists.

Hendrik Nicolaas Werkman was a pioneer of Dutch graphic design who defied categorisation. An outsider and visionary, he imbued the artistic and symbolic role of typography with a new significance. From 1923 until 1926, he published a magazine entitled The Next Call, whose nine irregularly published issues he used as a forum for his experimental typography. Wood grain, scratched type, and different ink thicknesses and paper textures were all part of Werkman’s repertoire, and no two copies of his experimental printing work were ever the same. Essentially, Werkman showed us that typography was not bound by systems, craftsmanship or rules. After joining the Groningen art circle De Ploeg in 1919, he produced much of its printed material, and his revolutionary designs and printing methods were enthusiastically received even by some of his more conservative fellow members.

Other Dutch graphic designers who appeared in the late twenties and early thirties included Willem Sandberg, Dick Elffers, and Nicolaas P. de Koo. Like Werkman’s, De Koo’s singular designs cannot easily be pigeonholed, and his principal clients, the city of Rotterdam and the Phoenix Brewery, always deferred to his design recommendations with alacrity.

Ironically, World War II was in many ways a productive period for Dutch graphic design. Clandestine presses helped to encourage perseverance, provide printed material and funds for the resistance, and preserve literary traditions. De Blauwe Schuit, a collaborative undertaking for which Werkman served as designer and printer, produced forty publications from 1941 to 1944. Owing to a paper shortage,Ascensus ad inferos, number 17 in the series, was printed in 1942 on used ledger pages. In August 1942, the first of Werkman’s two Chassidische legenden portfolios was completed. Produced in an edition of twenty, each portfolio contained traditionally printed texts and ten illustrations individually created with an ink roller and stencils. In spite of this unorthodox production method, the portfolios immediately found an audience and soon sold out.

Werkman was executed by the SS on April 10, 1945. Other figures in Dutch graphic design also died during the occupation. Graphic designers whose careers had been put on hold by the war resumed work after it ended. Being forced to live underground during the war, Sandberg returned to the Stedelijk Museum in 1945, he supervised the design of over three hundred catalogues and posters, establishing a new standard for other museums to follow. Here, Sandberg was in the unusual position of being both client and designer. Pieter Brattinga was another such case. Having learned printing and design at his family company, De Jong & Co, he was both editor and publisher of the square format magazine Kwadraatblad (Quadrate Journal). This was mailed to clients to demonstrate the printing capabilities of De Jong & Co. while giving selected graphic designers opportunities to publish experimental work.

On the other hand, there were the nonconformist designers who rebelled against existing social and artistic norms. Since the founding of his studio in 1987, Anthon Beeke’s designs have always been controversial. Deciphering his posters has often been a demanding task, as he seeks an interaction between them and the audience. Although his audiences are sometimes shocked by his blatant content, part of Beeke’s success can be attributed to their sophistication and receptiveness. Designers such as Swip Stolk consistently seek a confrontational edge; as art director for the Groninger Museum, Stolk was given the freedom to use their publication graphics to explore new design frontiers. Gert Dumbar established Studio Dumbar in 1977 and began producing highly experimental work for arts clients, corporations and government agencies. In it, humour, innovation, and teamwork always played a central role. In 1978, a group of young Rotterdam designers began the magazine Hard Werken (Working Hard), and two years later they founded Hard Werken Design. Never an official company, it had no design restrictions, and they arrived at solutions through highly subjective interpretations of their assignments. Unlike Hard Werken, Wild Plakken was more of a collaborative association and also had a distinct cultural and social agenda. Founded in 1977 by three Gerrit Rietveld Academie graduates, it accepted only clients it considered to be involved with relevant social, artistic or political issues. These included trade unions, the Dutch Communist Party, museums and the theatre.

Dutch cultural organisations and government sectors were early and enlightened graphic-design patrons. In 1929, the traditionalist book designer Van Royen was appointed to head the design and publications department of the postal, telegraph, and telephone company, and, as a result of these early efforts, its successor company continues to vigorously support revolutionary graphic design. Although his own typography followed a traditional approach, Van Royen readily gave PTT commissions to constructivist and other avant-garde designers. Thanks to this original initiative, the Dutch public continues to be exposed to excellent, innovative graphic design. All government agencies now have visual identity systems, and most cities and public projects have commissioned similar programmes. The PTT adopted a fresh visual identity programme in 1981, with Total Design and Studio Dumbar serving as the design team, and Studio Dumbar was again hired to revise the PTT’s entire graphic style in 1989. In 1965, the Nederlandsche Bank commissioned R.E.D. Oxenaar to redesign the Dutch currency, and he was later retained to design future banknotes. Each note was assigned an individual colour and subject theme. Oxenaar’s achievements were unparalleled in currency design. Sadly, these bank notes were removed from circulation with the advent of the euro.