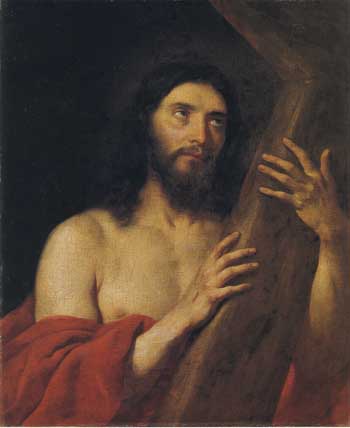 Govaert Flinck (1615–1660) was a much sought-after history and portrait painter in Amsterdam. During his lifetime he was probably more famous and successful than Rembrandt, who might have been his teacher. Flinck painted Christ holding the Cross in 1649. Coming from the collection of Barthold Suermondt it was part of the initial donation for the new Aachen museum, founded in 1882. This painting quite clearly illustrates Van Dyck’s influence on Dutch art. A poem by the Amsterdam writer Jan Vos (1610-1667) relates to a painting of the same topic by Flinck which might even be identical with the version kept in Aachen. From a contemporary source we learn the interesting detail that Flinck used to depict male biblical figures after Jewish models.

Having undergone a large-scale restoration by Ulrike Villwock the Aachen painting is now being presented to the public. Numerous alienating overpaints, discoloured inpaintings and old fillings had to be taken off, lacunae refilled and retouched. At some – as yet unknown – point in time the painting was totally transferred, i. e. the original fabric support was removed and the ‘resulting’ paint layer was attached onto a new canvas. This is quite a destructive measure and thus comparatively large parts of the paint layer got lost. Further damages occurred during the war and the post-war period, when – together with hundreds of pieces of art from Aachen – it was evacuated to the Albrechtsburg in Meißen (Russian Sector), where it was kept until 1961.

The visitor will find comprehensive documentation on Flinck’s painting technique and on the condition of the work before treatment. Moreover one will be informed about the restoration by large plates with texts and illustrations. A richly illustrated booklet (20 pages) with contributions by Thomas Fusenig (Essen), Gregor Weber (Kassel) and Ulrike Villwock (Aachen) is available for € 5.- This publication was made possible by Bernheimer – Fine Old Masters, Munich. A new frame was sponsored by Johnny van Haeften, London.