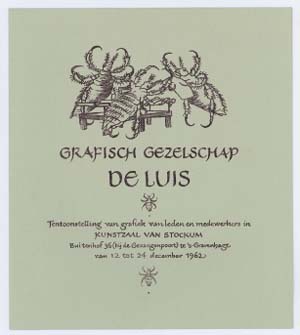 From 6 September the Rembrandt House Museum is staging an exhibition about De Luis, the Utrecht society of artists that created a furore between 1960 and 1980. The group was founded in 1960 by the artists William D. (later Dirkje) Kuik (1929-2008), J.H. Moesman (1909-88) and Henc van Maarseveen (b. 1926). Their prime motive was to promote interest in what they regarded as the undervalued modern graphic arts. They turned their backs on the avant-garde of the day and took visible reality as their starting point, with a preference for poetic and somewhat bizarre themes. This was why they called their society De Luis (The Louse): they wanted to act like lice in the pelt of modern art.

Of the three founders of De Luis Graphic Society, Moesman already had a reputation as an artist. His surrealist paintings had been sought after in the 1930s, even outside Utrecht. Among the other artists in the group were Charles Donker (b. 1940), Gerard van Rooij (1938-2006), Toon Jansen (b. 1937), Peter Vos (b. 1935) and Jaap Hillenius (1934-99). To put their ideals into practice the society created a distribution system for graphic art, ran a graphic workshop and arranged exhibitions in places throughout the Netherlands.

The exhibition has been prompted by the publication of the book Grafisch Gezelschap de Luis 1960-1980: individualisten in clubverband, compiled by Roman Koot and published by the Hercules Segers Foundation. The book was written by four Utrecht art historians, who have conducted intensive research in to De Luis over the last few years, using unique source material.