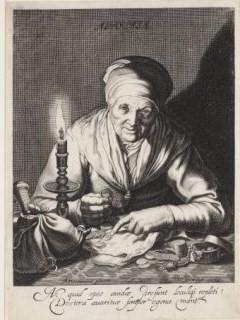 Old people were once respected for their wisdom and piety. At least that is one side of the traditional image. But this positive stereotype contrasts with the image of the elderly as depressive, miserly or even lustful figures, hated by younger generations. The museum presents more than a hundred prints from its own collection providing a survey of both positive and negative images of the twilight years. There is a long tradition of depicting old age, to which the Netherlandish printmakers of the sixteenth and seventeenth centuries such as Lucas van Leyden, Maarten van Heemskerck, Hans Bol, Maarten de Vos, Jacques de Gheyn, Hendrick Goltzius, Abraham Bloemaert and Rembrandt van Rijn made an essential contribution through beautiful allegories and varied genre pieces.

From wisdom to unequal love

Representations of old age are principally to be found in print cycles depicting the various stages of life, from infant to pensioner, or in individual prints in which the ages of man are shown as a staircase that rises towards midlife and then descends into old age and death. These deal with themes such as piety and wisdom, but also the sorrows of old age, miserliness and lack of respect from younger generations. There is also a strong tradition of personifying Winter as an old man. Hendrick Goltzius, for example, portrayed Winter as an elderly man warming himself over a fire in a winter landscape; old age was traditionally viewed as the winter of life.

Several of these themes also emerge in other kinds of prints. The association of old age with wisdom can be found in depictions of august scholars. The traditional image of the old miser hiding his money away is sometimes employed to personify the deadly sin of Avarice.

Another popular theme is that of unequal love, in which an old man or woman vainly attempted to win the love of someone younger. These prints deal with old people who wish they were still young and so set themselves up to be pilloried. The ridiculing of and disrespect for the elderly was a recurrent theme.

The exhibition coincides with the publication of Anouk Janssen’s doctoral thesis Grijsaards in zwart-wit: de verbeelding van de ouderdom in de Nederlandse prentkunst (1550-1650). She will defend her thesis at the Vrije Universiteit in Amsterdam on 20 April 2007. The book, available in Dutch only, is published by Walburg Pers, Zutphen.