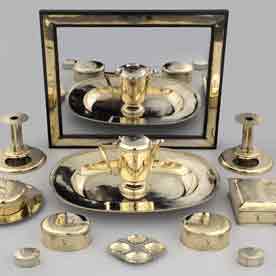 As the location of the courts of Dutch stadholders and monarchs, the seat of the States General and the home of countless prominent Dutch families and foreign envoys, The Hague has provided a ready market for local gold and silversmiths down the centuries. This autumn the Gemeentemuseum exhibits a profusion of top pieces.

It was the exceptional status of the city within the Northern Netherlands that determined the unique character of items made by Hague gold and silversmiths. National stylistic features blended with foreign influences so that by the eighteenth century, if not earlier, a distinctive and distinguished Hague style can be said to have emerged. The Gemeentemuseum possesses the largest and most important collection of Hague silver anywhere in the world. The last major exhibition of the museum’s holdings in this field was held in 1967. The pieces on display this autumn will include not only four dressing table sets and luxurious objects like wine coolers, tureens and candelabra, but also elegantly designed perfume burners, inkstands and sugar sifters. These outstanding items from the museum’s own collection will be displayed side by side with magnificent gold and silver objects, often of royal origin, drawn either from private collections or from prestigious museums like the Hermitage in St. Petersburg, the Victoria & Albert Museum in London and the Louvre in Paris. Examples of the latter include a sturdy wedding beaker dating from 1574 and made to celebrate the marriage of Johan van Oldenbarnevelt and a recently discovered ‘luiermand’ (decorative container for christening clothes) weighing in at eight kilos, which once belonged to the later stadholder Willem II and his wife Mary Stuart (1645). The City of The Hague’s huge and never previously exhibited 1839 wedding present to Crown Prince Willem and Princess Sophie is a good example of the objects in the possession of the Dutch crown.

The exhibition will be accompanied by a standard work on Hague gold and silver (in cooperation with Waanders Publishers) and authored by the Gemeentemuseum’s curator of decorative arts, Dr Jet Pijzel- Dommisse, with contributions by Dr Reinier Baarsen, Wies Erkelens, G. Sanders and Jean-Pierre van Rijen.