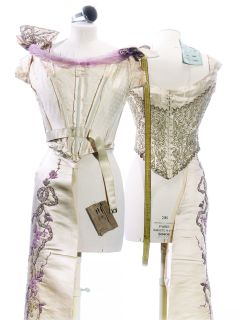 Unbelievably long trains, glittering gold and silver embroidery, pastel-coloured ball gowns with costly lace from the Belle Epoque… The exhibition Hague Court Fashions sheds a fascinating light on the court culture of a bygone era using items of clothing from the 18th to the 20th centuries. They represent top designs by illustrious fashion houses, both Dutch and international, made for the crème de la crème. The exhibition also reveals that in some respects, that long-lost Hague world is still with us today ­– as shown by certain key items from the wardrobe of the assassinated politician Pim Fortuyn (1948-2002).

The Hague, home to the court and the nobility, city of politicians and ambassadors, has always been sophisticated and outward-looking. La Haye even had its own language, known as ‘Hagois’, a striking mixture of Dutch and French. The city’s refinement is reflected in the gowns that have been preserved of ladies-in-waiting, dames du palais and others who moved in court circles. They wore these fashionable creations at receptions, dinners, balls, investitures and weddings, but also during times of mourning. In entertainment circles one could dress less formally than at court but here, too, the smart set of The Hague showed class.

A large and truly unique collection of garments has been preserved from the wardrobe of jonkvrouw Henriette van de Poll (1853-1946), lady-in-waiting to the Queen Mother, Emma, whose many letters provide a peek behind the palace screens. A host of anecdotes betrays a society in which fashion was a matter of life and death. Each item of clothing has its own special story that reveals the court’s written and unwritten rules. When did you wear a manteau de cour, what did demi-montante mean, what should you wear for “light mourning” and what on earth was meant by “compulsory décolleté”?

Also on show are special creations by purveyors to the Royal Household, like the famous Maison Kühne and Maison De Bonneterie. And you can see items of clothing worn by former stars of the Hague entertainment world, like Fie Carelsen (1890-1975), a diva of the stage, and Else Rijkens (1898-1953), a concert singer of international fame. The high-spirited Fie Carelsen led an eventful life at the side of various Hague society beaux: her costumes were made to sparkle on stage and in entertainment circles. The elegant creations by French and English couturiers worn by Else Rijkens reflect her life as part of the international jet set. At the beginning of the 20th century, The Hague was also home to a number of dandies, including the author Louis Couperus (1863-1923), who was always perfectly dressed and groomed. Exhibits include a camel-coloured overcoat, similar to the one on the statue on Lange Voorhout with which Kees Verkade immortalised Couperus.

Hague Court Fashions shows that an apparently bygone era is in many respects still with us – as revealed by key items from the wardrobe of Pim Fortuyn (1948-2002), who presented himself as a modern dandy during his “Hague period.” Fortuyn hoped to become Prime Minister, and to this end used a tried and tested weapon: an impeccable wardrobe.

A copiously illustrated Dutch-language catalogue entitled Haagse Hofmode will be published to accompany the exhibition (Waanders). Exhibition design is in the hands of Maarten Spruyt, stylist and art director for designers such as Marlies Dekkers, Bernhard Willhelm and Tommy Hilfiger, who also was responsible for the art direction of the successful exhibition Fashion NL in 2006.

Elegance is media partner of this exhibition.