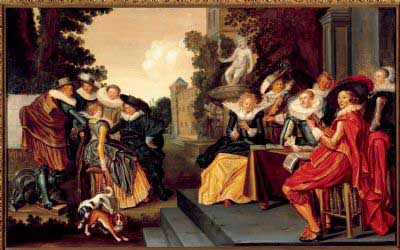 There are seven paintings attributed to Dirck Franchoisz Hals (1591-1656) at the Frans Hals Museum. A technical study of these paintings, in conjunction with the restoration of two paintings, has been carried out in an attempt to understand the artist’s painting technique, how his painting style evolved between 1620-40 and how he was influenced by other artists. The subject matter of these paintings is fairly consistent: merry companies of young people making music, dancing and courting. Stylistic disparities between the works, however, have prompted some research questions about Dirck Hals’s studio practise and his collaboration with other artists, such as Dirck van Delen (1605-71). The results of this research, including the restoration treatments of the Garden Party (c. 1620) and the Portrait of Arent Meyndertsz Fabricius (c. 1626), are expanded upon here in a short digital presentation. Additional information about these treatments can be found adjacent to the paintings.