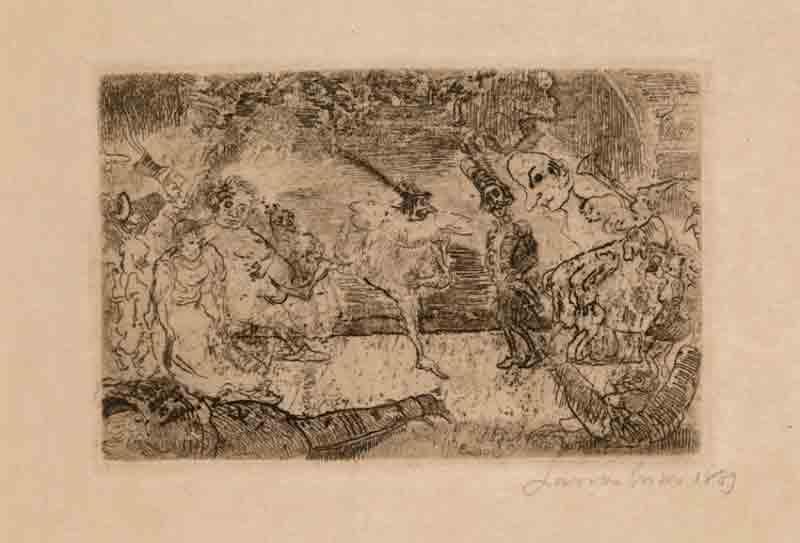 The Chabot Museum is ushering in the new cultural season with the special exhibition, The Fantastic Ball; the Graphic Work of James Ensor (1860-1949). This show reflects the Museum’s international policy.

The Belgian artist James Ensor is regarded as being the precursor of symbolism and expressionism, and his imaginative powers are particularly freely and diversely expressed in his graphic work.

Ensor had discovered the etching technique as a means of expression. The highpoint of his production was during the period 1886 to1889. The artist produced a total of approximately 130 etchings in which he treated various subjects with boundless imagination and humour such as self-portraits, portraits of family and friends, city scenes, sailors, landscapes, religious scenes and the Seven Deadly Sins along with fantastic depictions involving masks, demons and skeletons. The imagery of Ensor’s religious pieces is strongly reminiscent of Rembrandt’s work, on which they were frequently based.

This exhibition consists of a virtually complete retrospective of the etchings. These works are a part of the KBC Bank collection, and have been previously shown in São Paulo and at other locations. These etchings originally belonged to François Franck, Ensor’s friend and patron from Antwerp. The purchase by the former Kredietbank of the etchings from an American private collector in the 1980s ensured that this important legacy was able to remain in Belgium.

Specifically selected works by Henk Chabot are also on show that share Ensor’s themes such as the mask and the landscape. Hence, while maintaining their own spaces, both artists can be viewed in each other’s proximity.

To mark the James Ensor exhibition, the Bonheur theatre group will hold a number of performances at the Chabot Museum entitled The Fantastic Ball: the Private View.
These performances are a part of the Wereld van Witte de With festival, and will take place on Friday 8, Saturday 9 and Sunday 10 September 2006 (reservations essential). Tickets are available from the festival’s central box office.