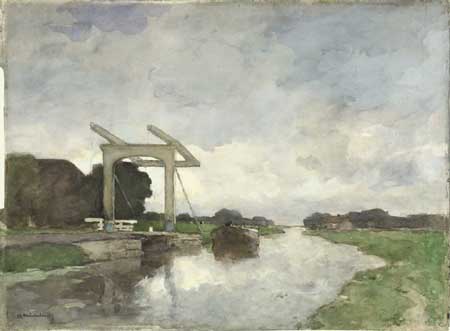 Characteristic Dutch landscapes with looming cloud-filled skies are featured in the new exhibition at Rijksmuseum Amsterdam Schiphol, opening on 16 January 2008. In all, the show presents eighteen superb watercolours by artists of the Hague School, including work by leading masters such as Weissenbruch, Mesdag and Maris. All the watercolours are from the Rijksmuseum collection and are rarely displayed publicly since they are especially sensitive to light. This remarkable show will run until 7 April 2008 at Amsterdam’s Schiphol Airport (airside area, between piers E and F).

Oil and watercolour paintings by Hague School artists were already hugely popular among collectors in Holland and abroad when they were being painted, around 1875-1900. Jan Hendrik Weissenbruch, Hendrick Willem Mesdag and Jacob Maris were leading exponents of watercolour painting. We owe our characteristic image of the Dutch landscape with those typical dark clouds gathering in the sky, largely to the Hague School. The name covers a group of artists who worked in and around The Hague between approximately 1860 and 1900. They rejected the conservative attitudes that dominated in the art academies of their day. Unlike traditional artists, who idealised their subject, they tried to create a realistic rendering of what they actually saw. They often worked in the open air, attempting to capture the surrounding landscape and the sensation of the moment. What mattered most to them was the light and the atmosphere of the landscape. Apart from work by the artists already mentioned, the show features watercolours by Willem Roelofs, Willem Maris, Paul Joseph Constantin Gabriël and Johannes Bosboom.