Hyperreal. The Art of Trompe l'Oeil

Painting images that are impossible to distinguish from reality has been a challenge for artists of all periods. The ability to deceive the viewer by making the painted seem real through the laws of optics and perspective is a visual game of which the earliest examples are known from descriptions in Greek literary texts. Since then, trompe l’oeil has been extensively present in the arts, particularly flourishing in periods such as the Renaissance and Baroque, after which it declined following Romanticism but never entirely disappeared from the artistic repertoire. 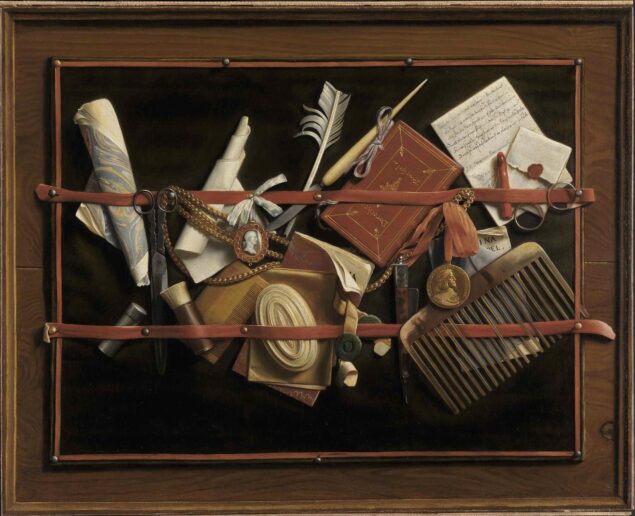 The exhibition Hyperreal. The Art of Trompe l’Oeil offers a reassessment of the genre through a group of works of high quality that exemplify the themes most widely encountered in easel painting. The chronological span encompasses the fifteenth to the twenty-first centuries but the works are presented in terms of content and settings rather than by date of execution in order to emphasise the continuity of the genre, which is still in use today. 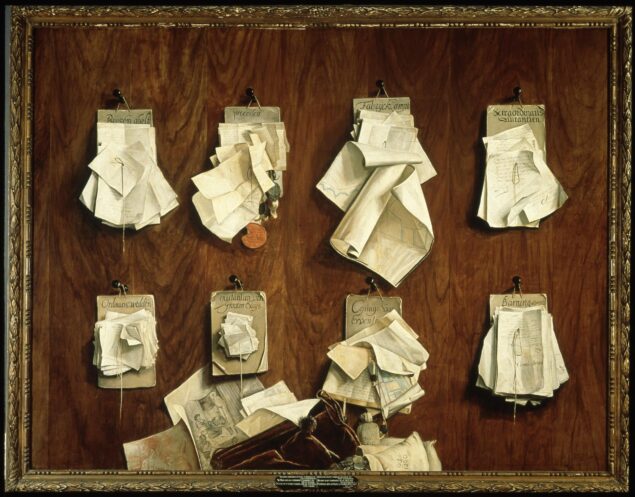 Cornelis Brisé (1622-1670), Documents on the Treasury Wall of the Amsterdam City Hall, 1656
Amsterdam Museum on long-term loan to the Royal Palace in Amsterdam, Amsterdam

The exhibition is structured into eight sections: Mise-en-scène (1), devoted to the still life (including works by Willem Claesz. Heda and Jan Baptist Weenix); Figures, frames and boundaries (2), which looks at the visual deception of the painted frame (with Man smoking a Pipe by Gerrit Dou, and The Rest on the Flight into Egypt by Adriaen van Gaesbeeck); Alcoves for the inquisitive (3), with depictions of niches, windows and cupboards housing objects that deceive the viewer’s eye (Cornelius Norbertus Gijsbrechts among others); Fake walls: Planks and Partitions (4), transformed into settings to display objects that reveal the artist’s skill (works by Cornelis Brisé and Johannes Leemans); Perfect disorder and corners of artists’ studios (5), which focuses on artists’ working spaces and on so-called quodlibets, a sub-genre of trompe l’oeil (Cornelius Norbertus Gijsbrechts and Samuel van Hoogstraten); Appeal to the senses (6), featuring compositions with sculptures or flowers as the principal motif (Annunciation Diptych by Jan van Eyck, Jacob de Witt’s Vestal Virgins); American renewal and its wake (7), devoted to various American artists who rethought this genre and their influence, and The modern trompe l’oeil (8), featuring works notable for revealing their creators’ imagination and ability to surprise, with a particular focus on the twentieth and twenty-first centuries. The exhibition concludes with a work by the sculptor Isidro Blasco that has been specially commissioned as the conclusion to this survey.

The exhibition is curated by Mar Borobia (head of Old Master Painting) and Guillermo Solana (Artistic Director of the Museo Nacional Thyssen-Bornemisza).