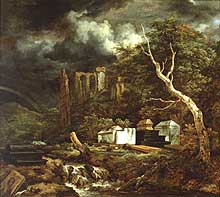 Royal Academy of Arts, London
Los Angeles County Museum of Art
Philadelphia Museum of Art
in collaboration with Seymour Slive, Gleason Professor of Fine Arts emeritus at Harvard University and former Director of the Harvard University Art Museums, who will contribute the catalogue that will accompany the exhibition. A world-renowned expert on Dutch art, Slive has written extensively on Rembrandt, Frans Hals and van Ruisdael.

The Philadelphia Museum of Art will present a retrospective devoted to one of the great landscape painters of all time. On view from October 23, 2005 through February 5, 2006, Jacob van Ruisdael: Dutch master of landscape will explore the extraordinary range, exquisite quality, and dramatic evolution of his art. Ruisdael ranks as the most important landscape painter of the Dutch Golden Age, the century of Rembrandt and Hals when the Netherlands began to develop its nationhood following the truce of 1609 in the wars with Spain. This traveling retrospective will reveal Ruisdael’s remarkable gift for awe-inspiring accuracy and detail and his astonishing ability to capture–through images of woodlands, expansive vistas, watermills, rushing torrents, crumbling ruins and huge, billowing clouds–the vastness of nature and transience of life.

Organized by the Royal Academy of Arts, London, the Los Angeles County Museum of Art, and the Philadelphia Museum of Art, the exhibition includes 47 paintings, 30 drawings and all 13 of the artist’s very rare etchings. The works have been assembled from public and private collections around the world, including the State Hermitage Museum in St. Petersburg, the Louvre in Paris, the Gemäldegalerie in Dresden, and the National Gallery of Ireland, in Dublin, and many others.

Little is known about the life of Jacob van Ruisdael (1629-1682). He was born into grinding poverty in Haarlem, the son of a Mennonite ebony framer and painter. He probably apprenticed early to his uncle, painter Salomon van Ruysdael. In his late teens, Jacob van Ruisdael suddenly emerged as a fully developed master of landscape. By his late 30s, he had left Haarlem for Amsterdam, the commercial center of Holland, and was baptized into the Calvinist Reformed Church. There he made a modest living from commissions but he never married or became wealthy. Although many of his works suggest that he traveled widely, even to Scandinavia, in fact during his lifetime Ruisdael never journeyed more than about 140 miles to Westphalia on the German border. He was buried at St. Bavo, a large church in Haarlem that punctuates the horizon in the artist’s views of the city spreading out below cloud-filled skies. In his career of less than 40 years, Ruisdael developed a unique, form-giving art. It was a pre-Romantic vision of the world in which nature evokes deep human sentiment. His fame greatly expanded after death. His art was embraced by the Romantics, such important figures as Goethe, J.M.W. Turner, and others.

Painted with soft, evocative brushwork, trees and other landscape monuments command attention as the forceful subjects of his paintings. Ruisdael’s images of trees and shrubs were so faithfully rendered that botanists today can easily distinguish the beeches, elms, and willows, and the various cultivars of elders and viburnums by their bark, leaves and growth habits. Meteorologists can identify the seasons and the weather evoked in his works through his accurately rendered cloud formations.

The dense wooded scenes of Ruisdael’s early period give way to the more spacious and diverse compositions of his later years. He painted the dunes, seashore, marshes and forests of his native land, but also the more dramatic terrain of Germany and even Scandinavia, which he knew from other artists’ work. The tension between fiction and truth become more pronounced in his paintings than in any previous landscape art, creating a landscape rich in accurate observation of the natural world yet imbued with evocative symbolism.

Among the highlights of the exhibition is the early Dune landscape of 1646 (St. Petersburg, The State Hermitage Museum). Painted when Ruisdael was about 17, it invests with novel effects a subject frequently taken up by his uncle. A high dune near Haarlem appears massive and solid, a copse of trees stands dramatically against the sky, and a strong concentration of light is cast on a sandy road. The monumental scale of his youthful ambition is reflected in the painting’s large size and high finish. Another loan from the Hermitage, one of the most renowned works in the Russian public collections, is Marsh in a forest (c. 1665), in which gnarled and twisted trees loom above a secluded forest pond to evoke universal themes of transience. In Bentheim Castle (Dublin, National Gallery of Ireland) of 1653, Ruisdael transforms a small hill into an imposing wooded mountain that provides a commanding perch for an ancient castle that he visited in Westphalia. It’s one of several versions by the artist, one in which he significantly revises the scene, making it a fiction and an intimation of the sublime. One of two celebrated versions of The Jewish cemetery, from Dresden (Statliche Kunstsammlungen Gemäldegalerie Alte Meister) is included in the exhibition. Here again the combination of conspicuous tombs, ruins, large dead beeches, broken tree trunks and small waterfalls allude to the transience of life.

“We lose sight of how dramatic the subjects were in his day,” says Lloyd De Witt, Assistant Curator of the John G. Johnson Collection, who will coordinate the exhibition at the Philadelphia Museum of Art. “The Jewish cemetery was a striking, exotic subject in Ruisdael’s time. It’s also noteworthy that certain other subjects, like the watermills and waterfalls that today seem so typical, were fresh and new when Ruisdael introduced them as subjects. As you enter into Ruisdael’s world, his towering achievements become something at which to marvel.”

Accompanying the exhibition is the catalogue Jacob van Ruisdael, master of landscape, by Seymour Slive. Published by Yale University Press, the richly illustrated book (288 p.; 30 black and white and 160 color illustrations, hard- and softcover) celebrates the achievements as the greatest and most versatile of seventeenth-century Dutch landscape painters. Slive demonstrates Ruisdael’s unrivaled range and quality through a vivid evocation of his career not only as a painter, but also as a draftsman and etcher. Slive discusses the artist’s clientele, early collectors and critics, as well as his influence on another preeminent landscapist, John Constable. The book will be available in the Museum store or by calling 800-329-4856 or via the Museum’s website.

Jacob van Ruisdael: Dutch master of landscape is supported by an indemnity from the Federal Council on the Arts and the Humanities, by grants from The Pew Charitable Trusts and the Woman’s Committee of the Philadelphia Museum of Art, and by gifts from generous individuals. The exhibition is also supported by the Robert Montgomery Scott Endowment, The Annenberg Foundation Endowment, and the Kathleen C. and John J. Sherrerd Endowment for Exhibitions at the Philadelphia Museum of Art.

A complementary exhibition A natural attraction: Dutch and Flemish landscape prints from Bruegel to Rembrandt is on view in the ground floor Stieglitz Gallery from December 17, 2005 to February 12, 2006.