Information from the organizer, 27 April 2019

This small copper comes from a private collection in Belgium and clearly refers to the prototype by Jan Boeckhorst in the Kunsthistorisches Museum in Vienna (oil on canvas, 118 x 178,5 cm), once part of the collection of Leopold Wilhelm. Another version by Boeckhorst  is in Schleissheim, Staatsgalerie  (oil on canvas, 124 x 188 cm). A  related drawing (369 x 546 mm) is in Göttingen, Kunstsammlung der Universität, Sammlung Uffenbach . Finally an engraving by Anton Joseph von Prenner (published 1728/33) bears the inscription IOANNI BOCHHOORST PINX. Although the hereby studied copper clearly refers to Jan Boeckhorst (1604-1668); a lecture by dr. Bert Schepers on Victor Wolfvoet in the Rubenianum on 16 December 2018 opened other doors . Indeed as it seems: a significant portion of the output of Victor Wolfvoet (1612-1652) consists of small-scale paintings on copper, copies after e.g. Rubens and his contemporaries (likely Quellinus,Van den Hoecke,  … and supposedly Boeckhorst). This ‘case study’ wants to put the light on this indeed small-scale copper that could be by the hand of Victor Wolfvoet.  The artist died in 1652 … maybe this can also help to fine-tune Boeckhorsts  prototype in Vienna which is considered to date from the 1650’s (see Hans Vlieghe, De ontwikkeling van Boeckhorsts werk, Cat. Exh. Jan Boeckhorst (1604-1668), Antwerpen/Münster 1990, p. 71). 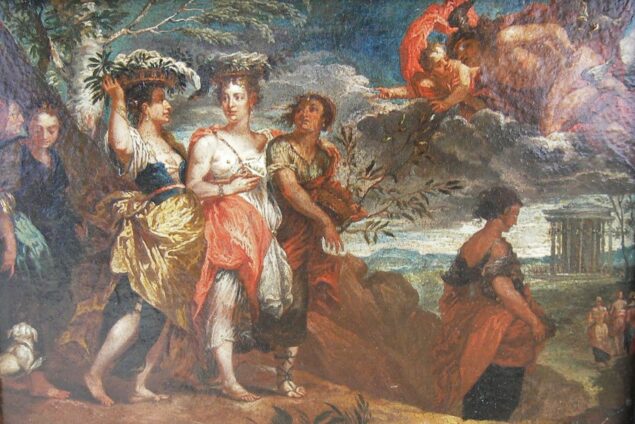