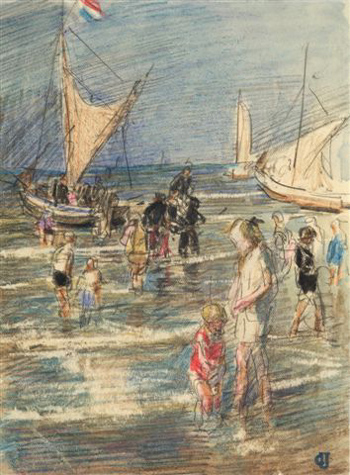 Johan Antoni de Jonge Esq. was the oldest son of an influential Hague family. Like Hendrik Willem Mesdag, he too was raised to love art. A career as an artist was not an obvious choice of career for him, however, as this was simply too unconventional in wealthy circles at that time. He therefore studied law in Leiden and in 1889 set himself up as a lawyer in The Hague.

While studying, De Jonge took lessons at the Hague Academy (Haagse Tekenacademie) and later with several Hague artists. He became a member of Pulchri Studio, contributing to exhibitions there. In 1903 he gave up his law practice and entered ‘artist’ after his name in the Hague directory. Nevertheless, despite his decision to become an artist, he always regarded it more as a calling than a profession. He was very modest about his work, exhibiting and selling very little, and remained relatively unknown as an artist. On his death, he was known mainly for his social conscience, having held offices with numerous charity organisations and sat on numerous committees.

Zeestraat 65
2518 AA The Hague
The Netherlands