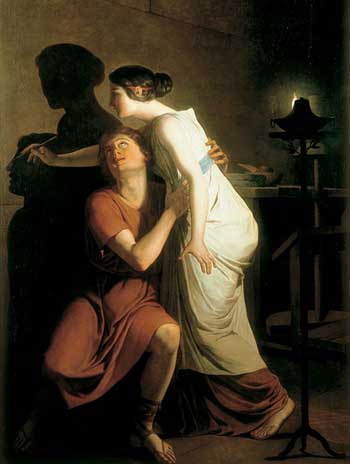 Neoclassicism, which was inspired by Classical Antiquity, was still not a popular style at the end of the 18th century in the Netherlands. In the painting of the Northern Netherlands the style never flourished, and in the Southern provinces cities such as Antwerp and Ghent maintained for a long time their baroque tradition. The city of Bruges on the other hand established relatively early on an important neoclassical tradition in painting. The history and portrait painter Joseph Benoît Suvée (1747-1807) was a pioneer in this tradition.

Suvée studied in Paris and won there the much coveted Prix de Rome. Later he would teach at the Paris Academy and become director of the French Academy of Fine Arts in Rome. He encouraged young artists from his home town to continue their study in Paris and Rome, and these artists included Jean-Bernard Duvivier, Joseph Ducq, Joseph Denis Odevaere and Frans Joseph Kinsoen. These progressive Bruges painters were also active in the international art world. It was in this way that from Bruges the new neoclassical style was introduced in the Southern Netherlands.

This development can be seen in the exhibition Joseph Benoît Suvée and Neoclassicism. The exhibited works include pure neoclassical history pieces and portraits which have a format that was then unknown in the Northern Netherlands. Apart from dozens of paintings there are also drawings with figure studies and landscape studies, and drafts.