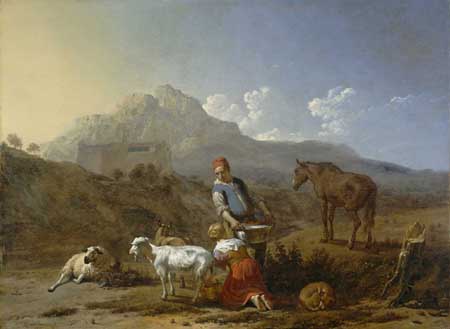 This winter, the Rijksmuseum will be presenting a selection of masterpieces by the 17th-century Amsterdam painter Karel du Jardin. The show will Du Jardin’s mastery of various genres of painting, including refined and tranquil Italianising landscapes, monumental historical paintings and superb portraits of the aristocracy. The Rijksmuseum owns one of the world’s most representative collections of Du Jardin’s paintings. It is the first exhibition ever to be devoted entirely to Du Jardin, brings together over twenty works from museums and private collections in the Netherlands and from abroad.

Unlike the majority of his contemporaries, Karel du Jardin (b. Amsterdam 1626, d. Venice 1678) was a talented painter in not one, but many different genres. He is especially famous for his small-scale landscapes, such as the charming Italian landscape with a woman milking a goat (1652) from the Rijksmuseum’s collection. Du Jardin depicted both sun-filled Italianate scenes and Dutch farmyards with pigs and sheep. He also painted a range of elegant portraits of aristocrats and merchants. His self-portrait (1662) on copper is one of the most fascinating 17th-century portraits of a Dutch artist. Du Jardin’s spectacular large-scale historical pieces, represented is the show by the impressive Conversion of Saint Paul (1662) from the collection of the National Gallery of London, are among his most remarkable achievements; he often chose themes that were only rarely depicted by other Dutch painters of the period.

During his own lifetime Du Jardin was praised by poets and writers, particularly for his attention to detail and elegant painting technique. As Cornelis de Bie, the artist’s biographer, wrote in 1661: “the surety […] of the brush at his finger and such sharpe clarity […] that the eye thereon doth linger.” Du Jardin’s valuable paintings were mainly purchased by rich individuals with an eye for elegance, but were also commissioned by prominent institutions such as the Amsterdam ‘Spinhuis’ (a women’s prison), for whom he painted a vast group portrait of the prison-governors.

Karel du Jardin was an artist who liked to travel. He lived for a time in Lyon and in Paris, and sailed with Joan Reynst, Heer van Drakestein, by ship via England, Portugal and Spain to Tangier and Algiers, where they met Michiel de Ruyter. He lived out his final years in Rome (where he was nicknamed “the Goatee”) and Venice, where he died in 1678. The suspected cause of death was food poisoning, after having spent a rather indulgent evening at the dinner table.