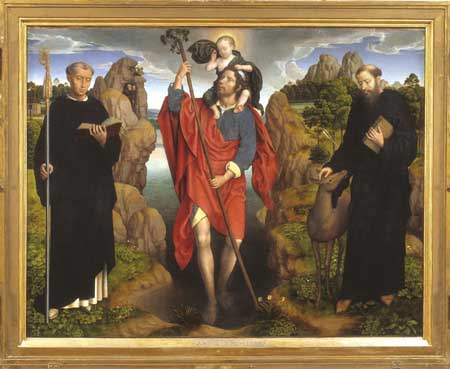 Charles the Bold (1433–1477), presented by the Historisches Museum Bern in 2008 and the
Groeninge Museum Bruges in 2009, is an exhibition on the brightest moment of European cultural
history. With unique exhibits and lavish staging, the Exhibition follows the rise and fall of
Charles the Bold, and describes his life in a thrilling way. It presents some 250 masterpieces
of Burgundian and Netherlandish culture of the late Middle Ages: glittering examples of the
goldsmith’s art, huge tapestries, incomparable illuminated manuscripts, exquisite panel
paintings, opulent parade armour, gemstones, coins, and much more. The works from the
outstanding collections of the two museums in Bern and Bruges will be supplemented with precious
loans from over 40 Museums and Collections in Europe and America (including the
Kunsthistorisches Museum in Vienna, the British Museum in London, the Getty Museum in Los
Angeles, the Metropolitan Museum of Art in New York and the Louvre in Paris).

Charles the Bold (1433–1477) was one of the wealthiest sovereigns of Europe.
He wanted to be king and tried to this end to marry his daughter Mary to Maximilian, the
emperor’s son. However, Charles the Bold was brought down by his overweening ambition.
Defeated by the army of the Swiss Confederates at the battles of Grandson and Murten in 1476,
he finally lost his life in the battle of Nancy in 1477. Only now did his daughter Mary marry
the emperor’s son, Maximilian. The house of Burgundy was absorbed into the house of Habsburg,
which grew into an empire spanning the globe «on which the sun never set».

The Exhibition displays outstanding works of art exemplifying Burgundian court culture. It
brings together a series of priceless objects lent by the world’s leading museums and libraries:
the most exquisite creations of the goldsmith’s art, magnificent tapestries, luxurious fabrics
and embroideries, precious illuminated books, panel paintings, parade armour, jewellery, medals,
and much more.

Using up-to-date technology, the exhibition graphically retells the dramatic life of Charles
the Bold. Experience the heyday of late-medieval art, the pomp and glory of the age of chivalry,
the splendour of court festivities, yet also the cruelty of war, Charles’s downfall and the
rise of the House of Habsburg into a world power.