The English writer and diarist John Evelyn (1620–1706) spent a few days in Antwerp in October 1641. He visited the city’s principal churches and trading houses, climbed the cathedral tower, marveled at Rubens’ paintings in St Charles Borromeo’s Church and purchased books from the celebrated publishers Plantin-Moretus. Evelyn also had an invitation to visit the Antwerp merchant Gaspar Duarte (ca. 1584–1653), who lived in a fine town house on the Meir, the city’s most important street. The building’s relatively simple exterior was in sharp contrast with the Baroque experience afforded by the Duarte family’s reception room. According to Evelyn, the house was ‘furnish’d like a prince’s’. It boasted expensive furniture, thick tapestries, books on all manner of subjects, printed and manuscript musical scores, and on the walls paintings by Italian and above all Flemish masters, from Titian and Tintoretto to Quinten Massys, Peter Paul Rubens and Anthony van Dyck. (A few years later, the family would add Johannes Vermeer’s Lady at the Virginal to the collection.) Gaspar and three of his daughters treated Evelyn to a concert ‘with rare musick, vocal and instrumental’, performed on instruments including one of the family’s harpsichords and virginals, of which they owned at least five. Antwerp could not have wished for better cultural ambassadors than this family of collectors, and Evelyn was duly impressed.

The luxury and artistic refinement in which Gaspar Duarte immersed his guest was exceptionally rich, yet not unique in seventeenth-century Antwerp. Gaspar’s father, who was originally Jewish, had moved to Antwerp from Portugal about seventy-five years earlier to escape the Inquisition and to set up business in the trading metropolis on the Scheldt. Antwerp was experiencing its Golden Age (1500-85) at the time and its rise attracted artists, artisans and merchants from far and wide, who contributed in turn to the city’s increasing prosperity. Burgeoning economic success triggered the emergence of a confident commercial and political elite which, besides work, placed increasing importance on a comfortable lifestyle and cultural refinement. Having achieved such a lifestyle, they were keen to show it off by means of the luxury goods they were more than able to afford. 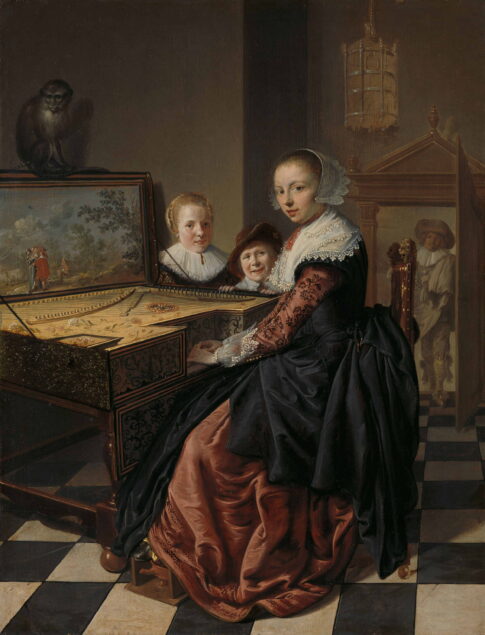 Artists, furniture makers, silversmiths, glass-blowers, book printers and instrument builders found fertile soil for their activities, enabling them to serve as a catalyst for the further development of cultural life. Antwerp gained an international reputation in this period too: as a major port, it formed a crossroads between Northern and Southern Europe and was the location of important branches and warehouses of the Hanseatic, Portuguese and other merchant communities. The city’s trade routes spanned the known world, including the Spanish colonial empire, and dozens of languages could be heard every day on the square where its commercial exchange stood. Knowledge and merchandise could be imported and exported via this network, and both local and international demand for luxury goods was high. Religious conflict (1568–1648) and the capture of what was then a rebellious, Calvinist Antwerp by Catholic Spanish troops in 1585 caused the economy to stagnate and the population to decline sharply. Yet both demand for and the supply of luxury goods remained very high until after the mid-seventeenth century (the Silver Age of Rubens). 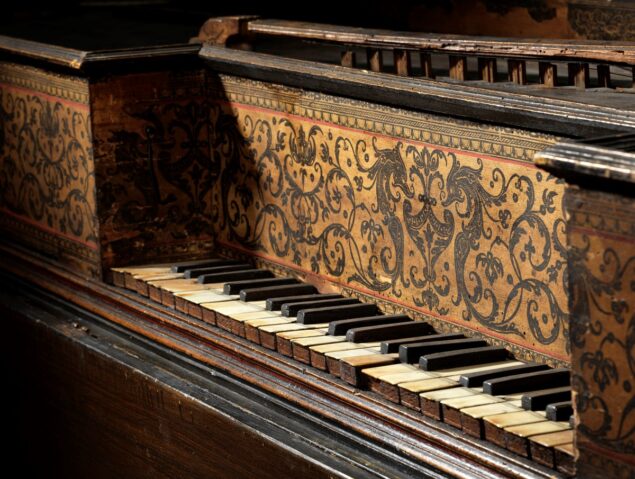 The Duartes made full use of Antwerp’s cultural possibilities, as reflected in the objects Evelyn observed in their home. Gaspar Duarte not only collected paintings: with at least five harpsichords and virginals, he evidently boasted an impressive collection of keyboard instruments too. He did not have to look far to find them, as Antwerp was one of the leading centers for the construction of these instruments and two if not more important harpsichord builders belonged to Duarte’s circle of acquaintances.

The first references to harpsichord builders in Antwerp date from the beginning of the sixteenth century. It was between 1560 and 1660, however, that the city was known as the undisputed world capital of harpsichord production. Every year, Antwerp workshops turned out hundreds of harpsichords and virginals. Contemporaries praised the instruments for the richness of their sound and their reliability. The members of the Ruckers-Couchet family were especially renowned for their exceptionally high-quality instruments. Hans Ruckers, his sons Joannes and Andreas and his grandson Joannes Couchet did for instrument-making what Peter Paul Rubens was doing for painting and Christophe Plantin for printing. Each combined the pursuit of artistic excellence and technical quality with immense business acumen. They developed efficient workshops full of specialist employees, who were able to deliver a large volume of products at a rapid rate, which enjoyed an outstanding international reputation and attracted many imitators. The Ruckers-Couchet family was not alone: names like Marten van der Biest, Joos Karest, Cornelis and Simon Hagaerts, Joris Britsen and many others also stood for excellent quality. Antwerp harpsichords and virginals did not only sell very well locally, they were sought-after throughout Europe and even far beyond until well into the eighteenth century. A substantial proportion of Antwerp’s harpsichord output, like that of its paintings and ornamental furniture, was destined for the international market.

The city also developed a strong tradition in the building of domestic and church organs. Dozens of organ builders were active in the sixteenth century alone, including the Moors and Brebos families. The Ruckers-Couchet family worked with organs too: Joannes Ruckers, for instance, was responsible for a while for maintaining the organ at Antwerp Cathedral.

The rise of the Antwerp keyboard builders was accompanied by a flourishing music printing industry (Antwerp was not the first or the only center of music publication, but it was certainly one of the most important) and an emerging bourgeois culture in which music too played a part.

The harpsichords and virginals in the Duarte home stood in music rooms that were full of artworks, the focal point of the family’s social life. The instruments were used to perform the private concerts to which friends and business contacts were invited. To the Duartes, as to many other wealthy Antwerp citizens, the instruments were an expression of good taste, cultural refinement and material prosperity, but also of the pursuit of harmony in a complex world. These are all themes that are frequently addressed in painting too, through the depiction of music and musical instruments. 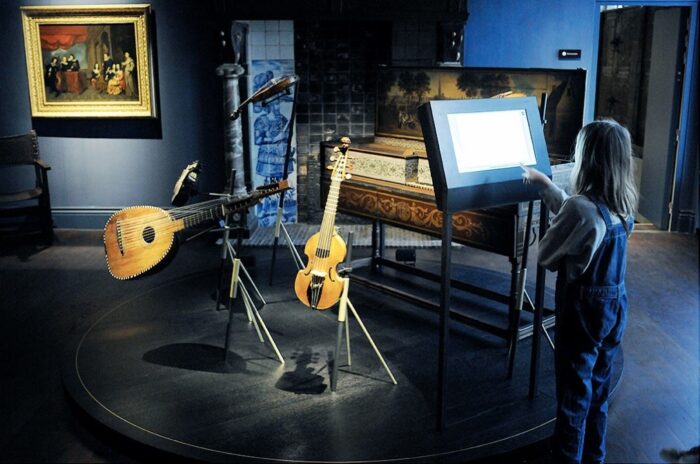 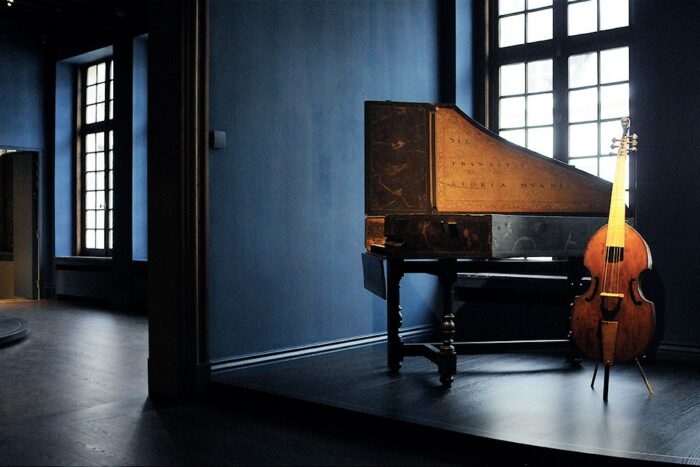 Thanks to the popularity of Old Masters like Jan Brueghel, Johannes Vermeer, Jan Steen, Frans van Mieris and Pieter de Hooch, we are very likely to have seen a painting with an Antwerp harpsichord or virginal at some time or other. The opportunity to view an actual Antwerp-made harpsichord or virginal, by contrast, is much rarer. The National Gallery in London, The Rijksmuseum in Amsterdam, Museum Boijmans Van Beuningen in Rotterdam, Staatlichen Kunstsammlungen Dresden, Akademie der bildenden Künste in Vienna, The Phoebus Foundation in Antwerp, the KMSKB in Brussels and some other smaller collection will participate in this project by lending their most attractive paintings.

In 2018, the Snyders&Rockox House in collaboration with the Vleeshuis Museum | Sound of the City, recreated the Duarte family’s two music rooms,  with an exceptional virginal and harpsichord from the Vleeshuis Museum collection taking pride of place. The Snyders&Rockox House plans to go a step further, by presenting historic Antwerp keyboards alongside famous and less well-known painted images of instruments of this kind.

The Snyders&Rockox House consists of the historic city palaces of Burgomaster Nicolaas Rockox and the painter Frans Snyders, which means the instruments and paintings will be exhibited in the upper middle class domestic context for which they were created. Once again, the Snyders&Rockox House will work closely with the Vleeshuis Museum | Sound of the City (Stedelijke Musea Antwerpen) and curator Timothy De Paepe, the concert organizer AMUZ as well as with Bart Demuyt (director of the Alamire Foundation) on the presentation and content of the exhibition.

The exhibition will be accompanied by a new recording and CD by the young Belgian harpsichordist Mario Sarrechia (La Petite Bande, Amsterdam Corelli Collective, La Sfera Armoniosa), commissioned by the Vleeshuis Museum, to be performed in 2022 on copies of 17th-century Antwerp keyboard instruments.

Information from the curator, 6 December 2021