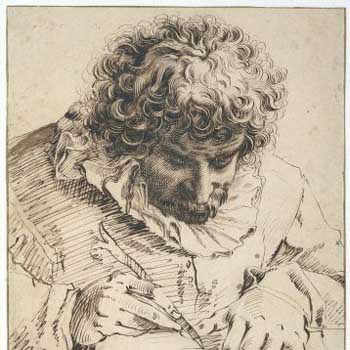 In the summer exhibition Art on paper, the Bonnefantenmuseum presents a selection of drawings, prints, and photographs, which were acquired for the Rijksmuseum Amsterdam during the directorate of Ronald the Leeuw who will leave the Rijksmuseum on July 1st. An exciting selection will be shown from the over 12.000 acquisitions, ranging from the western European 15th until the 20th century.

The exhibition will start with anonymous late medieval artists, such as for instance the fascinating ‘Master W and the Key’, and continues via the sensational drawings by Hendrik Goltzius and Bartholomeus Spranger, its way through art history well into the 20th century.

The focus on collecting Dutch art on paper of the second half of the past century is new for the Rijksmuseum, leading to the possibility of literally looking back on five centuries art on paper, whilst standing in front of Constant, Karel Visser and Ger van Elk.

Parallel to this exhibition, which focuses on western European art, the inner tower of the Bonnefantenmuseum will host an exhibition on Japanese prints and drawings, as well as folding screens and illuminated books that were acquired during the same period.