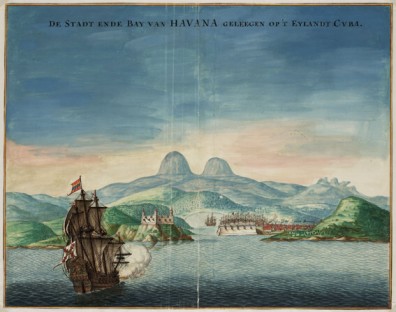 In association with the Nationaal Archief (Dutch National Archive), the Kunsthal Rotterdam is proud to present for the very first time the unique exhibition Land Ho! The world according to Vingboons in the 17th century, comprising work by Johannes Vingboons (1616/17-1670). Most of his watercolours have never been exhibited before, and, due to their fragility, will probably never be again on this scale. Three bound atlases containing 130 maps from the Vatican – the world’s largest collection of Vingboons’ maps – are to leave the papal library for the first time since 1689. Together with over 80 colourful handmade maps, they offer a glimpse of the mercantile world during the Golden Age. From Ghana to Sri Lanka and from Havana to Cape Town.

The Nationaal Archief in The Hague has over a hundred works of art, of which, a selection of the most beautiful 60 maps is available for viewing. The exhibition will also be showing 15 rare watercolours from the library of the Medici family in Florence, as well as four signed maps on parchment, which together depict the entire globe, belonging to the Nederlands Scheepvaartmuseum (Dutch Maritime Museum) Amsterdam.

In association with World Press Photo, ten international photographers were asked to photograph the cities drawn by Vingboons. World Press Photo winner (2005) Michael Wolf captured Guangzhou (Canton) in text and pictures and Gillian Laub shows us New York. Cities such as Malacca Town, Havana and Acapulco were captured by photographers living in the countries in question. The confrontation of works of the 17th -century mapmaker with the photographs from the present exposes many surprising similarities and differences. For example, the view of Cape Town from the sea is just as characteristic as it was then. Other pictures show modern skyscrapers where a windmill or a gallows determined the horizon.