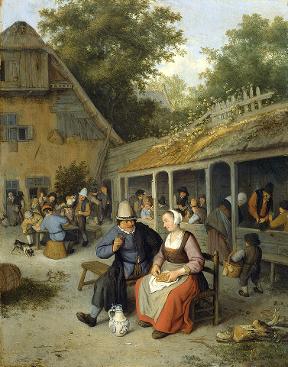 From 1 March to 5 June 2007 the Rijksmuseum presents a special exhibition about peasant life in the Netherlands in the Golden Age at Amsterdam’s Schiphol Airport. Works by famous 17th-century artists such as Isaac and Adriaen van Ostade, Jan Steen and Pieter Xavery feature scenes of country life.

Jan Steen’s Interior of an inn

The Dutch Golden Age produced a whole generation of artists that turned its attention to the popular genre. One of the highlights of Low Life in the Golden Age is Jan Steen’s Interior of an inn, known as ‘Two kinds of games’, which shows simple country folk boozing, partying and quarrelling. The exhibition also shows how these satirical scenes of rural abandon came to be paralleled in the mid-17th century by a more positive, pastoral view of country life, as in the Country Inn with Horse and Wagon by Isaac van Ostade and Cornelis Dusart’s Country Inn.

Low Life in the Golden Age shows, besides eleven paintings, also five sculptures. The exhibition premiers the remarkable sculptural ensemble, the Fellow Drinkers by Jan Pieter van Baurscheit and the Beggar with the Hurdy-Gurdy by an anonymous Flemish artist, both recently acquired by the Rijksmuseum. Pieter Xavery’s Two Laughing Fools is on show as well at the Rijksmuseum at Amsterdam’s Schiphol Airport.