Tempestuous seas, dramatic naval battles, serene harbours and bustling shores have been depicted in paintings since the sixteenth century. The sea had previously been represented most notably in illuminated manuscripts, tapestries and paintings but only as a setting for mythological and religious narratives. Dutch and Flemish artists such as Hendrick Vroom, Jan Porcellis, the Willem van de Veldes and Ludolf Backhuysen became specialist marine painters, who coincided with a time when the Dutch Republic became a formidable seafaring nation. The Dutch successfully fought for their independence from Spain and dominated trade routes to faraway places such as Asia, Africa and America. This created a booming economy that encouraged innovations in the arts and sciences, leading to the era famously known as the Dutch Golden Age. 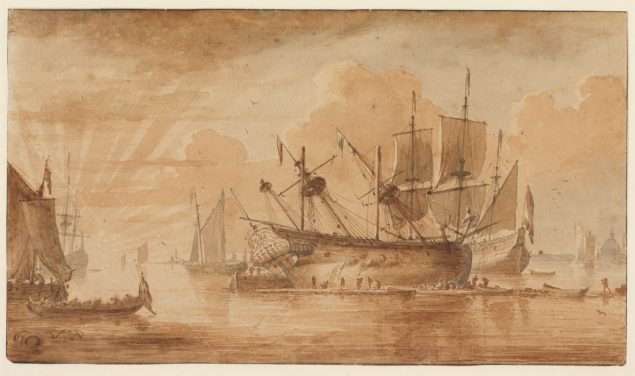 Marine artists, among many other specialist painters, met the growing demand from patrons, collectors and the wider market not only with their large scale oil paintings but also their drawings and watercolours. The Fitzwilliam Museum has an important collection of Dutch and Flemish drawings that was greatly boosted by the bequest of Sir Bruce Ingram in 1963. This consisted of over 1,000 drawings of mostly landscapes and seascapes, and includes many fine works by those artists mentioned above as well as Abraham Storck, Andries van Eertvelt, Simon de Vlieger, Cornelis Claesz. van Wieringen and later marine painters such as Hendrick Rietschoof and Johannes Christianus Schotel.

Thirty rarely-seen drawings and watercolours have been brought together in a special exhibition devoted to the seascape. The drawings on display demonstrate the seascape’s versatility from those that record the ocean’s unpredictable nature or its distant, foreign shores to others which capture historic naval and political events or scenes of everyday life. There are also fine ship portraits of ‘De Eendracht’ by Willem van de Velde the Elder, a harbour at sunset by Ludolf Backhuysen, studies of fish sellers by Simon de Vlieger and views of the Barbary Coast by Jan Peeters. 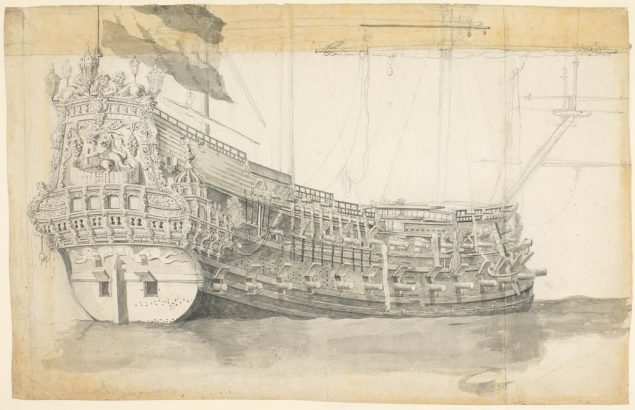